It was an unusual when the Mayor of the City of Syracuse and Police Chief Frank Fowler appear at a joint press conference.  From Facebook, Twitter, Time Warner News; it was clear that something was happening on the city’s west side as reports of shootings and large police presence hit social media.

“I heard screaming in the background” stated one post, another confirmed, “It seemed like a riot”.  Police arrived on the scene at the 300 block of Otisco Street there had been complaints of noise and then a report of a person down. There were reports of more than 300 people in an atmosphere that escalated to the point where bottles being thrown, amid the shouting. 4 shots were fired from the crowd according to officials. Due to the size of the crowd outside police agencies were called in to assist. 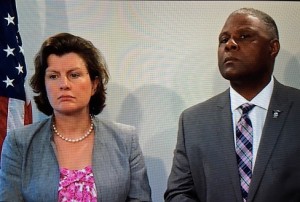 In the press conference Mayor Stephanie A. Miner and Police Chief Frank Fowler addressed the issues that may have led to last nights shootings. Just an accounting of what transpired and that the investigation is ongoing and may involve other law enforcement agencies.

According to the Mayor, “people were out celebrating Fathers Day” as both described the atmosphere of the evening. There were several guns involved according to Fowler.

The officials also reiterated that people should be able to gather in peace to celebrate without fear. According to published reports Gary Porter was shot and died from his wounds.  A police officer fired her gun and as usual in these cases she is on administrative leave.

If anyone knows anything about the shooting they’re asked to call the Syracuse Police Department at 442-5222. Calls are kept confidential. Anonymous tips can also be sent to authorities via the “SPD Tips” app