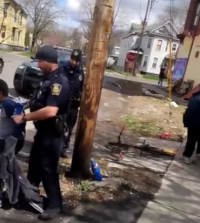 Syracuse Police held a meeting with neighborhood children after the incident asking, “what’s going on here?”

Late Monday afternoon urbancny.com received a video documenting the apparent apprehension of a child observed by officers responding to a 911 call for a larceny at a nearby store. The backstory begins with an alleged petty theft of a bag of chips. What’s seen in the video are police leading the child into a police car, he was crying obviously under extreme duress. The video begins with a bystander identified as 36-year-old, Kenneth Jackson (no relation) filming. Words are exchanged, the situation becomes tense, as police are asked “why are you treating a child like this.” Police respond that the bystander doesn’t know what’s going on, as they began to place the child into a patrol car. The situation could have easily escalated, as it was clear that tensions surrounding the encounter had increased. 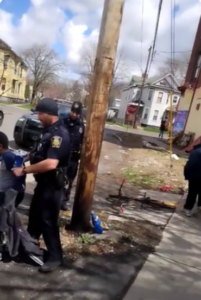 Initially, there were rumors that the child was arrested, taken away in handcuffs. There were cries of anger and disgust that, “a child would be treated this way by the police, like a common criminal!”

And with that, the story took on a life of its own. As the video became viewed by more people, there were concerns expressed by local television stations about the treatment of a child suspected of a crime. The concern that a child was mistreated by the Syracuse Police Department became the top local news story, with national news organizations inquiring about what’s happening in Syracuse.

At 12:54 pm, Syracuse Police Department to get ahead of this story issued a statement: “We (SPD) are aware of a video being shared on social media involving several of our Officers and juveniles accused of stealing from a store on the City’s northside. The incident, including the Officers’ actions and body-worn cameras, are being reviewed. There is some misinformation involving this case. The juvenile suspected of larceny was not placed in handcuffs. He was placed in the rear of a patrol unit where he was directly brought home.  Officers met with the child’s father and no charges were filed.”

By early afternoon, this story went from a low-grade hum to fully audible outrage, as people responded on social media. The outrage was perhaps caused by witness comments about how he was apprehended reportedly, snatched off the bicycle as he was fleeing. That part was not captured by the widely circulated video.

By 6:30 pm Mayor Ben Walsh made an official statement in response to what was both seen and not seen in the video.

“When the online video was first shared with me on Monday, I was concerned. I asked Chief Buckner and the SPD to review all body worn camera footage, which is ongoing. Officers were responding to a call for a larceny that had just occurred at a nearby business. Based on what I have seen, the body camera footage demonstrates no handcuffs were used by officers at any time. The child was placed in the back of a patrol car and taken home to his family. The officer knew the child from prior interactions and explained to him that he was being taken home. The officers returned the child to his family and discussed the incident with his father before leaving without filing any charges. What occurred demonstrates the continuing need for the City to provide support to our children and families and to invest in alternative response options to assist our officers.”

Based on conversations with city of Syracuse officials, the child was taken home and a discussion was held with the parent. Followed by a meeting between children of the neighborhood and Syracuse Police, as I was told the first words out of the police officers involved with the meeting was, “what is going on here?” Apparently, the police that patrol the area have interacted with these children and specifically with this child on multiple occasions. He was a child known to them.

We have a petty theft problem in Central New York, as a customer of the new Byrne Dairy on Tipperary Hill, I stood there and watch two people enter the store and brazenly walk out with two cases of beer.  Ask any manager at a Dollar Tree, Dollar General, or corner store if they’ve had a problem with petty larceny. Get ready for some stories. This problem isn’t confined to the city of Syracuse. While shopping at a suburban Wegmans myself and another customer watched a man walk out of the store with what appeared to be a roast shoved down his pants!

We as a community have a problem with theft. After years of ignoring larceny calls, police agencies are cracking down on petty theft. Stores are being forced to place many items under lock and key, why? Because people are simply walking off with merchandise, no retail operation can sustain those kinds of loses.

As a community that has a crushing poverty rate, this incident points to more serious issues we face. The Syracuse Police Department knew the children and in particular this child from past interactions. We have other young people that are in similar situations, having court mandated supervision because of their behavior.

The Syracuse Police Department acted with restraint, because if you interfere with an arrest or if you’re seen as getting in the way of “police business” you can be charged with obstruction of governmental administration, this did not happen. What we witnessed warts and all, is what people have been asking for “Community Policing”. Now, we’ll wait for the official review of all video footage to determine facts before throwing the entire Syracuse Police Department under a bus.