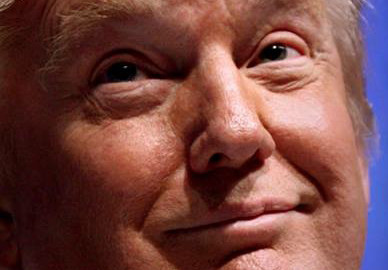 Donald Trump ignited a fire when he made disparaging comments about Mexican immigrants. With the world watching, the man who brags about his wealth was blunt about his views on immigration. Trump declared his candidacy for the office of Presidency of the United States of America. He went on to paint the entire Mexican immigrant population with one broad brush.

Immediately, members of the Latino/Hispanic community registered their fury at the man who is said to be worth 8.9 Billion.

He went on in later statements to double-down on his views saying, “You know, I’m 100% correct”.  This set off a storm of criticism from members of the Hispanic community. The Daily Rundown host, Jose Diaz-Balart on MSNBC confronted Mr. Trump, regarding his views about members of the fastest growing minority group in America.

What followed was something that even, “The Donald” didn’t anticipate. One-by-one, there was a visceral reaction by corporations that had ties with the real estate mogul.

First, it was Univision which was under contract to air Trump owned pageants, Miss USA and Miss Universe, they refused to air the shows, in a statement Univision said, “At Univision, we see first-hand the work ethic, love for family, strong religious values and the important role Mexican immigrants and Mexican Americans have had and will continue to have in building the future of our country,” the company said in its statement. “

The department store Macy’s cancelled their relationship with Donald Trump following his controversial comments about Mexico and Mexicans. Macy’s issued a statement, “Macy’s is a company that stands for diversity and inclusion. We have no tolerance for discrimination in any form. We welcome all customers, and respect for the dignity of all people is a cornerstone of our culture. We are disappointed and distressed by recent remarks about immigrants from Mexico. We do not believe the disparaging characterizations portray an accurate picture of the many Mexicans, Mexican Americans and Latinos who have made so many valuable contributions to the success of our nation.”

Macy’s statement continued, “In light of statements made by Donald Trump, which are inconsistent with Macy’s values, we have decided to discontinue our business relationship with Mr. Trump and will phase-out the Trump menswear collection, which has been sold at Macy’s since 2004.” 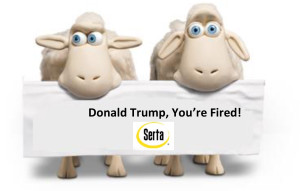 Serta Mattress apparently didn’t want to be in the same bed as Trump, cancelled their relationship which had them producing a Trump branded mattress. In a statement, “Serta values diversity and does not agree with nor endorse the recent statements made by Mr. Trump. We will not be renewing our license agreement with the Trump Organization when it expires at the end of this year and are in the process of unwinding our relationship.”

His comments are akin to committing, “the equivalent of professional suicide” according to a business industry expert. His statements are hurting his personal and professional brand.

However, his standing among potential voters in republican primaries has experienced an increase as he catapulted into second place behind Jeb Bush.

Attention grabbing behavior is not new to “The Donald”, this is the same man who demanded that the President of the United States, “show his Birth Certificate”.  In addition, asking for college transcripts, claiming Barack Obama wasn’t a good student.

Donald Trump has shown an absolute lack of respect for President Obama. He’s questioned his intelligence and education, painting Barack Obama as “other” than American.

Witnessing this assault on the first African-American President of the United States was painful, especially painful for black men. You see we – black men – have always had to present our, “papers” whether the task is as simple as applying for a minimum-wage job, returning home from the store, a simple traffic stop, to proving that you are a college graduate.  I doubt that Mr. Trump has ever been asked by a law enforcement officer, “Where are you going and where are you coming from?” We black men have to consistently prove that we are something other than a racial stereotype.

Trump believed that President Obama became successful due to affirmative action or some other un-deserved advantage. The billionaire is using deep seeded racialized fear to advance his political career.

His attacks on Mexican’s and immigrants are designed to tear us apart using our greatest asset against us, our diversity. Our mixture of every population of the world makes use unique to this planet.

While tribal fights tear apart our global neighbors.  Americans have shown time and time again, the ability to rise above those who’ve sown seeds of division. Donald Trump is no different from those political opportunists who’ve preceded him. He just has a lot more money. In this game, he’s continuing to play the racist Trump card.