Law Enforcement officials have announced the arrest of 56 year old, Cesar Sayoc of South Florida for sending bombs to high profile public officials, including former Presidents Clinton and Obama.  A total of 13 bombs were identified by officials, the latest this morning was sent to Sen. Corey Booker, another to California Senator Kamala Harris. 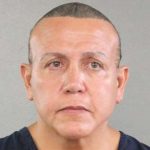 Various news outlets have posted pictures of the van driven by Sayoc which was decked out in pro-Trump pictures along with “CNN Sucks”. Included on the vehicle was a picture of Hillary Clinton with a target emblazoned over her face.

The van was seized draped in a blue tarp and taken to a facility where the investigation of this vehicle will occur. More arrests may follow; the case will be brought by federal prosecutors in Manhattan.