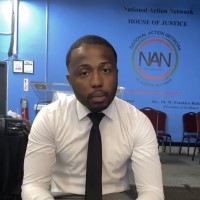 In a statement released on Saturday August 14th 2021, “The Ryder Law Firm and The Law Offices of Bonner & Bonner are currently suing the Syracuse Police Department, Chief Buckner and the command staff and other Police Officers, for $33 Million Dollars, plus punitive damages for irreparable injuries to Officer Hanks’ career, reputation and self-image.

Officer Hanks spoke first, “they made a lot of mistakes in that investigation. I’m surprised that the mayor isn’t out here, or Chief Buckner isn’t out here standing beside me to say; ‘listen, mistakes were made and we will get to the bottom of it’.  They don’t want to do that, what Buckner said is ‘we’re gonna handle it in court.’ Hanks continues, “I developed my reputation on the streets of Syracuse. People know who I am from playing basketball, but not only do I play basketball, my work ethic is outstanding, and it speaks for itself. The amount of gang members I’ve arrested, the amount of drug dealers I’ve put in jail. The amount of criminals that I’ve removed from the streets, to keep everybody here safe. My work speaks for itself, so I don’t have to get up here and talk everybody to death. But what’s been done in the dark must come to light”

The lawyers outlined the additional claim in detail regarding “Deputy Chief Richard Trudell’s racist proclivities” a link to that document is contained in this story. They also claimed that there are others who have engaged in racist behavior. “We will not rest until Trudell’s removed. “

The press event ended as the crowd gathered chanted “Trudell’s got to go”. The following is just a portion of the complaint filed this morning. See copy of the “complaint”    Police Office Brandon Hanks Files Federal Lawsuit Against Syracuse Deputy Chief

Complaint “ The Federal Lawsuit states: DEFENDANTS, and each of them, agreed, conspired, and took overt acts preventing the promotion of Officer Brandon Hanks, with an award-winning reputation for policing, under the knowingly false and contrived assertions, Inter Alia, that Officer Hanks was “gang affiliated,” a “narcotics trafficker,” and listens to “rap music.”

Defendants, and each of them, maintained discriminatory hiring practices to avoid hiring minorities. The CITY OF SYRACUSE, as well as SPD’s leadership, including DEFENDANTS’ CHIEF BUCNKNER and DEPUTY CHIEF TRUDELL have perpetuated such practices despite the CITY OF SYRACUSE still being a party to a March 27, 1980 consent decree with the U.S. Department of Justice, mandating DEFENDANT CITY OF SYRACUSE to affirmatively correct its police department’s exceedingly racially disparate staffing with an almost complete absence of African American police officers despite that population comprising 30% of the citizens of Syracuse. As of June 26, 2020: “Black officers still represent just 9% of a police force that is 30% Black…” “Of the 109 new officers sworn in since 2018, only 14 — or 12.8% — have been African American, according to data the police department presented Thursday. Despite a 40-year-old federal consent decree….”

Defendant Deputy Chief Richard Trudell’s racist proclivities were unconcealed and publicly manifested, when in the past, he had been blatantly forthcoming as to his racist views by unashamedly admitting on record that he irremissibly uses the terms ‘niggers’ to connote African Americans and ‘spics’ for Hispanic Americans”