A two-day conversation on issues of race, disability, and justice in the policing of bodies in communities and schools. Bringing together national experts, community activists, and local stakeholders, this event centers transformational, citizen-led reform of policing and public safety through critical dialogue and practice. Presented by The Lender Center for Social Justice, The Center on Disability and Inclusion, and The Landscape of Urban Education Lecture Series. 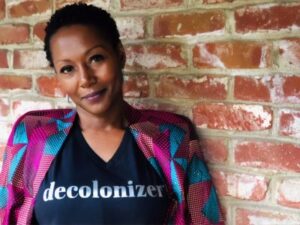 Monique W. Morris, Ed.D. is an award-winning author and social justice scholar with three decades of experience in the areas of education, civil rights, juvenile and social justice. Her research intersects race, gender, education and justice to explore the ways in which Black communities, and other communities of color, are uniquely affected by social policies.

She is the executive producer and co-writer of the 2019 documentary film PUSHOUT: The Criminalization of Black Girls in Schools, based on her books Sing A Rhythm, Dance A Blues: Education for the Liberation of Black and Brown Girls (The New Press, 2019) and Pushout: The Criminalization of Black Girls in Schools (The New Press, 2016). She is also the author of Black Stats: African Americans by the Numbers in the Twenty-First Century (The New Press, 2014) and Too Beautiful for Words (MWM Books, 2012). She worked with Kemba Smith on her book, Poster Child: The Kemba Smith Story (IBJ Book Publishing, 2011) and has authored dozens of articles exploring race, gender, justice, and education.

Morris is the Founder and President of the National Black Women’s Justice Institute, an organization that works to interrupt school-to-confinement pathways for girls, reduce the barriers to employment for formerly incarcerated women, and increase the capacity of organizations working to reduce sexual assault and domestic violence in African American communities. Her work has been profiled by MSNBC, CSPAN2, The Washington Post, TED, The New York Times, Essence Magazine, NPR, and PBS, among other media outlets. She also frequently lectures on the life and legacy of the artist Prince.

2:30-4 p.m.: Panel on Policing and Reform Initiatives in Black and Brown Communities

Participants will be invited to breakout rooms to continue the conversation regarding the future of community policing.

Please note, if you register on Thursday 4/15 or later, you may not receive your Zoom attendee information until the hour before the event. If you register after the event has started, we will get you the Zoom information as soon as possible.