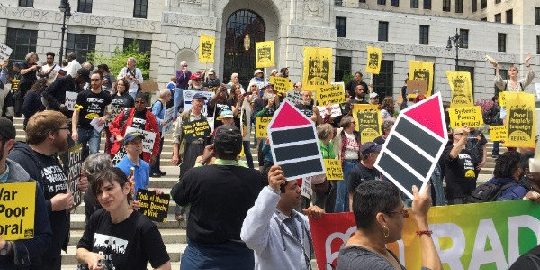 The 40 days of action for the Poor People’s Campaign: A National Call for a Moral Revival began on May 13 and a growing number of Central New Yorkers has taken up the challenge of changing the moral narrative.  The time since May 13 has moved quickly.  As the 40 days come to a close and the next phase of the campaign begins, there are three important events occurring next week.

The 40 days of action culminate on Saturday, June 23, in Washington, DC with a rally by the U.S. Capitol.  This will be a “Stand Against Poverty, Mass Rally & Moral Revival.” The NYS Poor People’s Campaign has received funding to help pay for bus transportation from Syracuse.  However, people need to sign-up ASAP, if they want to use this option.  To sign-up, use this sign-up form. , it is important that you do this as soon as possible! The event begins at 10 a.m. and is expected to continue into early afternoon.

Prior to the rally in DC, there are two events in NYS.  On Sunday, June 17, 6:00-8:00 p.m. there’s a watch party at University United Methodist Church, 324 University Ave. in Syracuse.  Refreshments, stories, and ideas; join in songs led by Marcia Hagan; watch the live Poor People’s Campaign broadcast from Washington, DC; and plan the next steps in the local campaign.  The watch parties have been a way for the movement to coordinate efforts and talk about how the four evils of militarism, racism, poverty, and pollution affect each of us.

The last rally and direct action in Albany, during this phrase of the Poor People’s Campaign, will be held on June 18 in the afternoon. The theme is “A New and Unsettling Force: Confronting the Distorted Moral Narrative”.  They’re expecting a number of people from CNY to go to Albany for this and everyone’s welcome.  For information on transportation from Syracuse, contact Craig French, crfrench5.0@gmail.com.

If you are traveling to Albany on June 18, please register for the event.  This allows the NYS Poor People’s Campaign organizers to plan for enough food and space for everyone. Notice that rally begins around 2 p.m., however, it is helpful to be in Albany by 11:30 a.m. for orientation and lunch.  If you RSVP, you will receive an email with details about the location of the orientation and information about the rally.

“Going to Albany has been a powerful experience.  We have met New Yorkers from across the state, whose lives have been touched by poverty, racism, pollution, and militarism.  Sharing their stories with us have been the homeless, people impacted by the cost of healthcare, farmers, military veterans, former teachers, and many others.  Stories have been shared and tears shed.  We have educated each other and those who have listen to the testimonies given at the rallies. Most importantly, we have affirmed that we are stronger when we work together on these issues.

We all recognize that part of what we have been doing since May 13 is raising awareness. We know that this is just the beginning and that the changes which are needed will take more time and effort.  These 40 days have proven that we are ready!”

If you have questions, please email them to cnypoorpeoplescampaign@gmail.com or post them on our Facebook page.  Our Facebook page includes photos and videos from the rallies in Albany, as well as other information.

The Alliance of Communities Transforming Syracuse (ACTS) is a grassroots, interfaith network advocating for social justice. We are voices striving for a more just and fair community that improves the quality of life for all.