SYRACUSE, N.Y. – The City of Syracuse Department of Parks and Recreation Pops in the Park concert series returns to Onondaga Park this July with an expanded lineup of five concerts on July 1, July 8, July 15, July 22 and July 29. The shows are free and open to the public thanks, in part, to support from Price Chopper. 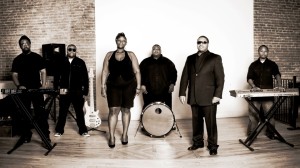 The City of Syracuse Department of Parks and Recreation announced today the inaugural performance of this year’s “Pops in the Parks” series will be postponed due to weather. The concert, headlined by the band Brownskin, will be rescheduled to August 5, 2014.

Brownskin  is rescheduled to August 5, Brownskin, who impressed audiences at the City’s holiday tree lighting ceremony this past November. The group features Nate Brown on drums, Gary Carter on vocals, Joe Cummings on keyboard and vocals, John Dale on bass, Danielle Mitchell on vocals, and Ekwan Brooks on keyboard.

On July 8, the Carolyn Kelly Blues Band returns to Pops in the Park. They recently appeared at the Taste of Syracuse and will also appear at the New York State Blues Festival and Harborfest later in July.

Soft Spoken, a favorite in the Pops in the Park program, will perform on July 15. The band, with Reggie Seigler, bassist, Keith “Kool” White on drums; Dave Kuykendall, guitarist, Robert Brown on trombone and keyboards; and vocalist Donna Alford, offers a smooth blend of danceable R&B and soul.

Pops in the Park will mark the 50th anniversary of the Beatles first concert in America with The FabCats, the only Syracuse Area Music Award (SAMMY)-nominated Beatles band, which will perform on July 22. Their music is a blend of Beatles and other bands from the 1960s. The band features Gary Frenay on bass and vocals, Arty Lenin on guitar and vocals, Dave “Mitch” Miller on drums and vocals, and Dave Novak on guitar and vocals. The FabCats has a combined 125 years of performing experience.

On July 29 the series finale will be the Stan Colella Orchestra under the direction of Len Colella. The Orchestra’s repertoire consists of big band selections of the 1940’s and 1950’s along with contemporary hits. Stan Colella helped to create Pops in the Park with the City Parks Department.