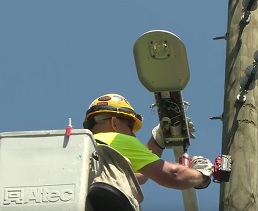 Street Light Sales to the City of Syracuse, the Village of Nyack and the Town of Warwick Will Enable Installation of More Energy-Efficient and Affordable Lighting

Since 2015 Over 54,000 Municipal Street Light Purchases Have Been Approved

Albany — The New York State Public Service Commission (Commission), as part of its continuing work to reduce municipal energy consumption across the State, approved separate requests to sell utility-owned street lights to three municipalities: the City of Syracuse (Onondaga County); Village of Nyack (Rockland County); and the Town of Warwick (Orange County). With the change in ownership, the municipalities can control street lighting and install their own state-of-the-art energy efficient lights to lower costs to taxpayers and protect the environment.

“Municipalities across the State are joining us in support of New York’s clean energy goals, including work to develop renewable energy projects and install energy-efficient street lighting,” said Commission Chair John B. Rhodes. “In New York, we will leave no stone unturned when it comes to finding solutions to reduce reducing energy consumption in support of Governor Cuomo’s Green New Deal.”

In 2015 Governor Andrew M. Cuomo signed legislation amending the Public Service Law to establish procedures for the transfer of ownership of complete street lighting systems to municipalities or other government entities. With the change in ownership, municipalities take control of street lighting and have the opportunity to install state-of-the-art, energy efficient lights and new technologies to lower costs to taxpayers and protect the environment. Since that time, the Commission has approved the sale of over 54,500 street lights to 26 municipalities. The total value of these street lights is nearly $31 million.

The latest energy efficiency lights, known as LED or light-emitting diodes, use significantly less energy than traditional street lighting. The adoption of LED-lighting can save municipalities up to 65 percent of their electricity costs for street lighting. 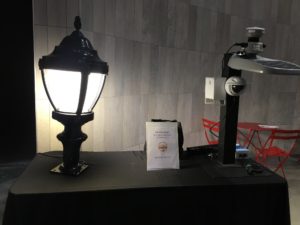 For an average municipality, street lights may account for up to 40 percent of total local government electric energy consumption. Pursuing conversions allows local governments to lower municipal energy expenditures while also advancing the State’s efforts to lead on climate change by lowering overall emissions from the energy sector.

LED-related energy savings can contribute significantly to the State’s energy and environmental goals. In fact, if all of the State’s street lighting were converted to LED fixtures, the energy savings potential is estimated to be enough electricity for 75,000 average-sized houses. Financial savings could be as great as $28 million per year. Given the opportunity for savings, municipalities across the State have been showing interest in either buying utility-owned street light facilities with the intention of converting to LED or working with utilities to convert utility-owned street lighting.

Today’s decisions may be obtained by going to the Commission Documents section of the Commission’s Web site at www.dps.ny.gov and entering Case Numbers 18-E-0787; 19-E-0076; or 19-E-0468 in the input box labeled “Search for Case/Matter Number”. Many libraries offer free Internet access.

Commission documents may also be obtained from the Commission’s Files Office, 14th floor, Three Empire State Plaza, Albany, NY 12223 (518-474-2500). If you have difficulty understanding English, please call us at 1-800-342-3377 for free language assistance services regarding this press release.