Urban CNY with John Sharon discussing his campaign for New York’s 128th Assembly District, the seat currently held by Sam Roberts is on the upcoming November 4th ballot. The 128th district is comprised of a patchwork of localities from its northern edge encompassing the Village of Liverpool, parts of the Town of Salina, East Syracuse, Dewitt, Jamesville, Town of Onondaga and the Onondaga Nation. Areas with minority populations have been carved from the City of Syracuse’s south, west and east sides. The district includes the democratic voter rich 17th Ward.

You can’t help but sense enthusiasm as John Sharon discussed his bid to unseat incumbent Sam Roberts. Instead of being critical of his opponent he pivots to his ongoing theme concentrating on the delivery of constituent services.

Sharon proclaims, “I’m committed to doing everything I can to help people including constituent service. I really believe constituent service is the key.”  He recalls growing up in the city of Syracuse and how when he was a child and his dad died U.S. Congressman Jim Hanley came to the aid of his mother and their family, “I don’t know what he did but he quietly did something.” 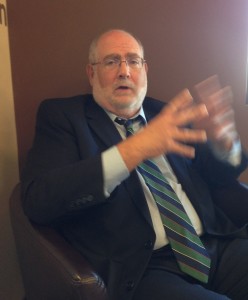 Having to ask the requisite question, “why do you want to run and what will you do if elected?”. I was met with a stream of reasons why he’s so enthusiastic about wanting this job, he continues, “I was born in this town I was raised in this town and I’m committed to this town. I like it here; I’m at this point in my life where I can give something back.”

John Sharon spent over a decade as a Senior Onondaga Deputy County Attorney he gestures with both hands as he’s emphasizing the skill set he brings to the table, Sharon’s demeanor was palpable raising his voice as if he were making a point not to be missed, “I’m a professional advocate”, He charges,” I’m a lawyer you hire me, I’m your advocate I’m there for you and your interests. I know how to represent the interest of my client.”

Sharon continues, “I have some ideas, In addition to being a professional problem solver. When you litigate something you look under the hood then you try to find a way to fix it. My skill as an attorney is to take something complex and explain it in a way that it is understood”.  Sharon believes his experience is his strength being a professional advocate and problem solver.

His view of government appears to come from the premise of constituent service and how to direct people and businesses to the appropriate resources. He’s a pragmatist when it comes down to what an Assemblymember can do.  “There are certain things that clearly you can have little influence over. But if somebody calls you and says ‘I’m having a problem with city government, I’m having a problem with state government.’ Whatever it is, picking up the phone is the way of trying to find a way to help them out.”

Sharon is not a supporter of the lakeside amphitheater program he refers to it as, “the amphitheater to nowhere, we have other problems” he points to the City of Syracuse, “There are 500 miles of pipes in the City of Syracuse that require our attention, on that issue I agree with the Mayor.”  Regarding the structure of bill passage in New York State Sharon says, “Take one bill at a time, and get rid of riders. It may be a good bill but then somebody puts on a rider. I think one bill at a time is the way it ought to be, but I guess that’s where the horse trading takes place”

Some Assembly members gauge success by listing their legislative accomplishments based on the number of bills they pass. Numbers of bills passed doesn’t faze the candidate, “I don’t believe passing bills is an end all.” 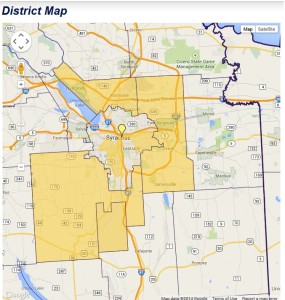 I had to ask the question about his intentions if he’s successful in his campaign.  “What do you use when your legislative powers don’t serve what you feel are your constituents interests?” Sharon looks up and replies, “The bully pulpit” clearly he intends on utilizing his elective position to bring attention to issues important to the area.

While the candidate has focused his attention on various rolls of an Assemblymember constituent service, lower taxes and anti-safe act are key issues as you listen. He believes his experience working both inside and outside government is a skill set he brings to the table. Sharon’s not concerned whether he can handle every call that’s made to the Assembly members’ office. “Whether it’s another member of the assembly or a particular department in New York State sometimes it’s as simple as making a call. He smiles as he reflects on being a County Attorney and how those skills are transferable, “I spent 35 years working for local government, I know my way around making calls.” Now John Sharon wants to make those calls on behalf of the constituents of the 128th Assembly District.