Earlier this month, the current administration pushed to reduce vital protections in the Clean Air Act that have improved air quality in our cities. Even when these changes are reversed, they will not guarantee good air quality for all of us. Breathing dangerous air is sadly nothing new for far too many New Yorkers, particularly those in Black and Brown communities. For decades, these communities have suffered the negative consequences of polluted air, which causes a host of health problems – especially for children. A 2019 report commissioned by the NYCLU found that 53 percent of Black and Latinx children live within 500 feet of a major roadway. Traffic is one of the largest contributors to air pollution and is most potent within the first 500 feet of a major roadway.

Years of racist and misguided planning have resulted in shameful outcomes that require thoughtful and intentional action to reverse the environmental and public health impacts resulting from the placement of these highways. That’s why I introduced the Schools Impacted by Gross Highways, or “SIGH” Act. This bill would prevent new schools from being constructed within 600 feet of major roadways. It also would require the state to take proactive steps to address the negative impacts of air pollution on students attending schools located near such pollution hotspots. 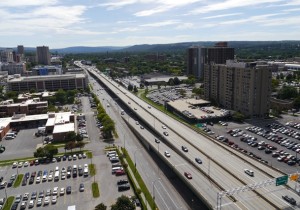 We need not look far for examples of such poor planning. In Syracuse, the Dr. King Elementary School is only a few hundred feet away from I-81, a major north-south thoroughfare that cuts through the heart of Syracuse. For decades, youngsters attending Dr. King – a school with 96 percent minority enrollment – have been exposed to the harmful effects of this steady stream of interstate traffic.

The fact that so many Black and Brown children go to school close to highways is not an accident. Instead, this is the result of decades of racial segregation, redlining, and the intentional placement of pollution-emitting infrastructure in Black and Brown communities – also known as environmental racism. Children who attend schools near roadways have increased risk of asthma, chronic respiratory issues, cardiovascular effects, and learning disabilities. These are long-lasting health problems, which lower children’s overall academic performance. And it should come as no surprise that Black children in particular suffer some of the highest rates of asthma in New York.

These trends are evident statewide. In a school-based sample, 15.5% of 4–5-year-old Bronx children were identified as having asthma compared with 9.2% of New York City students overall and 8.9% of U.S. children 2 to 17 years of age. Asthma morbidity rates are also much higher for Bronx children than for other children nationwide. School-aged children in Syracuse experience similarly elevated asthma levels, as well as significantly elevated lead levels compared to their peers outside the city and across the state.

Conditions like asthma don’t just have health consequences; they present educational challenges as well. Students with asthma miss more school days because of it. These lost days add up, causing students to fall severely behind in their work, perform poorer on tests, and miss important developmental markers.

Dr. King School in Syracuse is just one example of this phenomenon of environmental racism in our midst. At least three other schools in my own 53rd District fit this description, and there are numerous other examples statewide of schools sited near busy roads or major highways.

This proposed legislation is a step toward ensuring our children have access to a healthy learning environment regardless of their zip code. It requires our state to be holistic in its planning and to take action to dismantle environmental injustice wherever we find it. The problem of pollution in Black and Brown neighborhoods is decades in the making, but we must move quickly to undo this shameful legacy so that all our communities – and our children – can prosper.