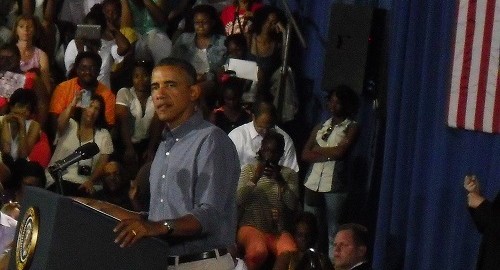 On September 19, 2014 at 2pm, the rain garden at Henninger High School in Syracuse, NY was dedicated in commemoration of President Obama’s visit last year to the school.  An embellished boulder, designating the garden as the “Obama Rain Garden,” was added to the site through the efforts of Mike Behnke, President of the Syracuse Parks Conservancy.

In his visit last year, the President discussed the “importance of ensuring that every American has the opportunity to achieve a quality education by reducing cost and improving the value of higher education for middle-class students and their families.”

The rain garden at Henninger High, 600 Robinson St., is the first on school property in New York State.  It is intended for student and community use in the summer. It is one of three demonstration gardens that are part of the environmental trail at Sunnycrest Park. These gardens, believed to be the first such in the nation, were developed by the Syracuse Parks Conservancy to connect students and the neighborhood to the City parks.

“It’s a demonstration garden,” said Mike Behnke, member of the Sunnycrest Park Association, which began construction of the nearly 40-square-foot garden in summer 2009, “to teach students about conservation of the water in order to show how important it is not to take the water for granted.”

Rain that falls on the roof is diverted into a rain barrel that waters the garden. Diverting rainwater to the soil keeps urban pollutants from washing into sewers, rivers and lakes.

All of the plants in the garden are native perennial species that are drought-resistant in order to reduce the amount of maintenance needed during periods of low rainfall.