After years of stagnation the City of Syracuse is beginning to show signs of life and growth. Most people don’t pay attention to the various announcements that detail new or expanded businesses. We’ve focused on what’s closed, but there are signs of life in the city.

The growth of housing has been phenomenal with upscale housing leading the way. Along Syracuse University’s Connective Corridor, cascading off university hill, housing is booming.

On the east side, off Thurber Street an area once hidden behind urban forests are now sites for apartment buildings. Dozens of former office buildings have gone residential responding to a desire by many to live near the city’s core.

In the LeMoyne College area, Salt Springs Road at the city’s edge is jam packed with new housing, to the point where once empty streets are now off street parking for those new inhabitants. 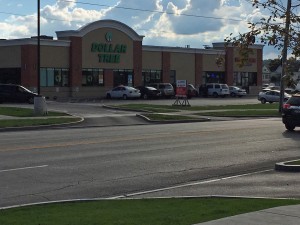 To the west, Geddes Plaza offers Dollar Trees, Aldi’s and many more stores to the decade’s vacant Sam Dell Dodge property. The nearby Sunoco tripled its size and services now offering hot and cold food. At the corner of South Geddes and W. Fayette Streets, the ambitious residential project takes an old industrial building converting it into apartments. New windows are in; the exterior painting has begun transforming a major gateway on the city’s west end into apartments.

St. Patrick’s school is now high end residential, the Coleman’s are even building a new residence on Lowell Ave. a testimony to the confidence some are feeling in a revitalized Syracuse.

A 50 million dollar investment in the New York State fairgrounds attracted a record 1 million people and over 20 concerts played the new 30 million dollar Lakeview Amphitheater. Concert goes came from all over, hotels and restaurants in Armory Square felt the impact. 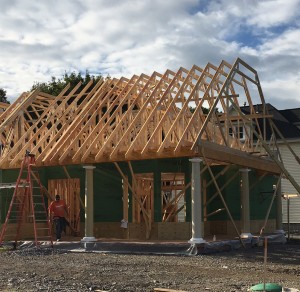 Syracuse University has released their 20 year plan that calls for the establishment on campus “city neighborhoods” a dramatic change from Chancellor Kent Syverud’s predecessor, Nancy Cantor and her commitment to community engagement policies.  Syracuse University will leave the Skytop area and concentrate on creating one connected campus environment.  That’s just a tip off the iceberg if you factor in the major reinvention of the Carrier Dome and connected athletic complex.  Syracuse University has already stated that will ask for public funds to build the new complex, which includes the Carrier Dome.

Not to overlook but looming over everything is the major reinvention of Interstate Route 81. There have been numerous focus groups public hearings, artists renderings of what the project will look like once completed.  But one thing for sure, those residents in Pioneer Homes and Central Village will be displaced, some temporarily; but the majority of these residents will never return. Pioneer homes holds sentimental value for some, constructed in 1938, the first housing project built in New York State. SHA, Syracuse Housing Authority Board of Directors has already determined that the project will reduce density in the area which means a permanent reduction in the size of this long standing Public Housing Project. 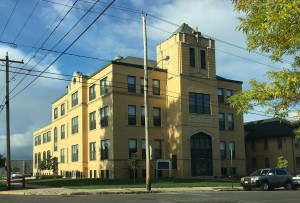 Syracuse is facing tough decisions; the location of Interstate 81 will begin the largest displacement of people since the construction of the original highway. Poverty will continue to plague the area unless innovative programs reach directly into some of our poorest census tracts.

The recently awarded 500 million dollars to uplift Syracuse and surrounding areas has yet to get going at full speed. Those spinning a version of Syracuse as being a decaying Upstate NY city, on the contrary there are signs of life in almost every neighborhood.

In downtown Syracuse, it is not uncommon to see people walking their dog downtown at night. A vibrant new community is being born.

The now stalled Inner Harbor will be developed by someone. It’s just a matter time before we get through the corruption scandal that’s engulfed COR Development.  Employment being relocated downtown as Aspen Dental takes part of the old Sibley’s Building as an anchor to Red House’s new artist residence and performance facility.

The cleaning of Onondaga Lake is going to have benefits we’ve not seen in our lifetimes. Becoming a recreational lake again will fill the once filthy waters with boaters and anglers everywhere.  The Onondaga Lake Park trail extended looping the lake with walking a trail.

With so much change scheduled to happen simultaneously, in five years you won’t recognize Syracuse. The question is, are we ready for the greatest reconfiguration of the City of Syracuse to occur since Urban Renewal? 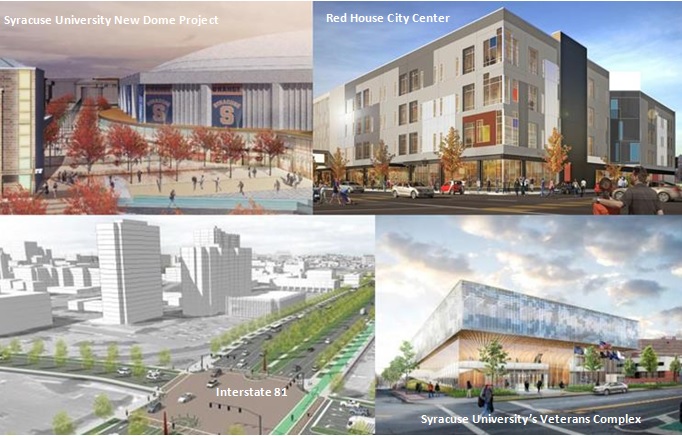 The above pictures are just a sample of  what’s to come.  If all projects move forward as expected, there will be a major shift in how we navigate the numerous traffic challenges. Major change also offers the opportunity for Syracuse to increase its tax base, while providing for diversity of income. Income is needed in a city that has so many  impoverished neighborhoods. If promised employment initiatives are successful Syracuse can reinvent itself once again.