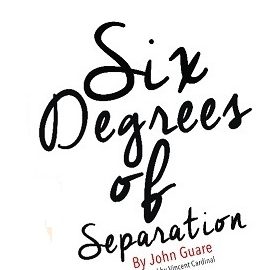 The Red House Arts Center continues its 2017 season with Six Degrees of Separation, by award-winning playwright John Guare which will run from March 9th – 18th.  Diamonds and denim clash in this fast-paced and wildly clever play inspired by true events.

Six Degrees of Separation follows the antics of Paul, a charming young con artist who convinces a wealthy Manhattan couple he is the son of celebrated actor Sidney Poitier. When the couple charitably invites Paul to spend the night in their swanky digs, Paul’s con spins frantically (and hilariously) out of control as house guests and emotions run haywire. Winner of the New York Critics Circle Drama Award and the Olivier Award for Best Play, Six Degrees of Separation is a Redhouse production you certainly don’t want to miss! Six Degrees of Separation reflects on the idea that any two individuals are connected by at most five others. The play was the inspiration for the 1993 movie by the same name that starred Will Smith and Stockard Channing and was also the basis for a game Six Degrees of Kevin Bacon: the goal is to link any actor to Kevin Bacon through no more than six on-screen connections. 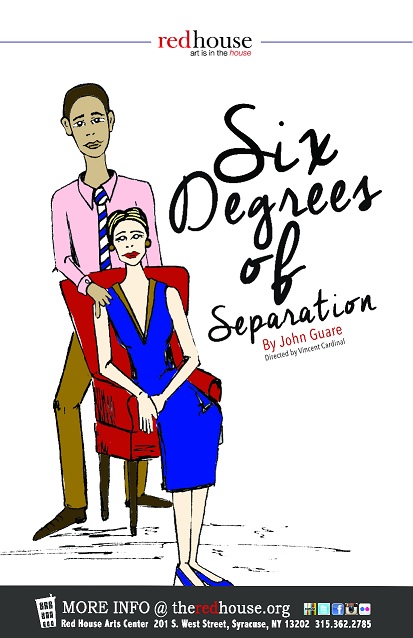 He has previously directed all three equity actors Steve Hayes, John Bixler and Laura Austin individually, however this will be the first time directing all three in the same production at the same time. Vince Cardinal also has another very special connection to this production and playwright John Guare that he shared. “I had the honor of being John Guare’s assistant when I was a graduate student in Playwriting at the Yale School of Drama. I learned so much from Guare working with him in his home and taking his notes in the rehearsal and in the production process. Rehearsing SIX DEGREES OF SEPARATION at Redhouse brings me back to Guare’s hilarious, distinctive, and brilliant voice whispering notes quietly in the dark theatre, even as the actors brought his genius to full voice on the stage.”

Redhouse’s Six Degrees of Separation runs from March 9th – 18th. Tickets are $30 or $25 for members. The Red House Arts Center is located at 201 S. West St. in Syracuse, NY. Parking is available adjacent to and across from the theater, as well as nearby in Armory Square. For tickets, please call the Box Office at (315) 362-2785 or visit www.theredhouse.org. Corporate Sponsors for this production are Bousquet Holstein, WAER 88.3 FM and Destiny USA. Media sponsors are Galaxy Communications and NewsChannel 9. 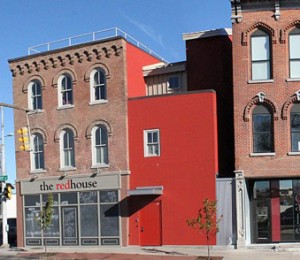