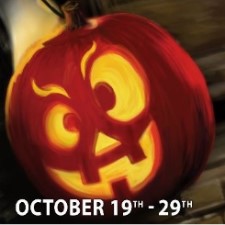 Redhouse Arts Center continues its fall season with 70 Scenes of Halloween by Jeffery M. Jones, which runs from October 19-29, 2017. If you take a David Lynch movie, a domestic drama, and a haunted house than shuffle them together and toss them up in the air, you get this theatrical “52 card pick-up” of a play. As scenes are randomly selected live on stage by the stage manager at every performance, a horror-comedy-tragedy about a marriage dying of familiarity randomly and surprisingly emerges. Playwright Jeffery M. Jones crafted the play while his own marriage seemed to be falling apart creating a fractured autobiography where the outcome depends on the luck of the draw.

It is the story of ‘stranger things’ happening in the suburban home of Joan and Jeff, a young married couple who love each other but no longer desire each other. Their mundane daily irritations have become actual monsters, witches, ghosts and maybe even killers. The fragmented plot is spun so cleverly, that while you’re entertained trying to piece the surprising story together, you’ll discover to your delight and horror many tricks and treats in this highly theatrical, frighteningly funny, and hauntingly scary evening. When the doorbell rings this Halloween, will you be brave enough to answer?

70 Scenes of Halloween cast features a blend of Redhouse newcomers Redhouse favorites. Making their Redhouse debuts are Equity actor Gavin McNicholl who will star at Jeff and Whitney Andrews who will star as his wife Joan. Returning to the Redhouse stage and playing their alter-egos are Stephond Brunson as the Beast and Marguerite Mitchell as the Ghost along with Donovan Stanfield who will play the Stage Manager.

Gavin McNicholl is an actor based in Manhattan. His most recent regional credits include: Frederick Fellowes in Noises Off and Patsy in Spamalot at Connecticut Repertory Theatre; Arceo in Mornings of April and May with Connecticut Free Shakespeare; George Lewis in Once in a Lifetime and Marchbanks in Candida at The Monomoy Theatre on Cape Cod.

Whitney Andrews is a recent graduate from the University of Connecticut, where she received her BFA in Acting. She was recently seen in In The Car With Blossom and Len at Queens Theatre.

Previous credits include: Lysistrata, Olives and Blood, O Beautiful, and Spelling Bee. Redhouse audiences will remember Stephfond Brunson whose previous credits include Booker Robinson in Ragtime, Marcellus in The Music Man, Ray in The Choice, Scarecrow in The Wiz, Anelle in Steel Magnolias and Jack in Reefer Madness. Marguerite Mitchell was most recently seen onstage at the Redhouse as Elizabeth in Six Degrees of Separation. Other theatrical credits include: Carol in Oleanna (SALT Nominee), Juliet in Romeo and Juliet (SALT Nominee), Cecily Cardew in The Importance of Being Ernest and Mimi Marquez in Rent. 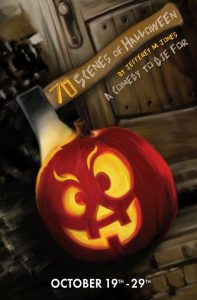