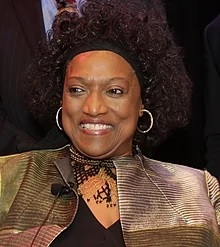 Jessye Norman, American Opera Singer was born in Augusta, Georgia and died in New York, Sunday, September 29, 2019 at the age of 74.

She was a heralded soprano opera singer who won four Grammy Awards and the National Medal of Arts, along with so many other outstanding accolades.  She grew up in a musical family. Her mother and grandmother were pianists, her father was a singer.

Norman grew up singing in the church. She was awarded a scholarship to Howard University in Washington, D.C. “I had the pleasure of being her room mate in the dorm. She was freshman and I was a senior mentor in Tubman Quadrangle on campus at HU”. Many of our classmates enjoyed and cherished her success as an opera Diva.

As she made her claim to fame and returned to the area for performances, she would always invite some of us to chat and visit with her during her performance breaks.

Upon hearing the news, classmates began calling and sharing memories of Ms. Norman. Some of us listened together to recordings and videos on YouTube with teary eyes as we reflected our time with her. There is so much to say about Norman.

After graduating from Howard where studied voice, she went to Peabody Conservatory in Baltimore, Maryland and to the University of Michigan. She made her operatic debut as Elisabeth in Richard Wagner’s Tannhauser in 1969 in Berlin and went on to other prominent roles and the Metropolitan Opera.

We invited you to read the full story of this artist, share the legacy and keep it alive by sharing her contributions throughout generations.

“Sing with the Angels”