Albany, NY – Registration is now open for Parks & Trails New York’s 21st annual Cycle the Erie Canal tour, an unforgettable opportunity to bike across New York State and take in the rich history of the legendary canal that transformed America. The eight-day, 400-mile recreational bicycle tour from Buffalo to Albany is scheduled for July 7-14, 2019

Cycle the Erie Canal participants will experience one of the best trails in America as they cycle through historic canal villages and discover the small-town charm of Upstate New York. Along the way, canal historians and local experts will introduce riders to the people, places, and things that make the Erie Canal so important to the history of New York and the nation. Cyclists will visit some of Upstate New York’s most iconic attractions, such as the Women’s Rights National Historic Park in Seneca Falls, and Fort Stanwix in Rome, a full-scale fort recreation from the French and Indian War. 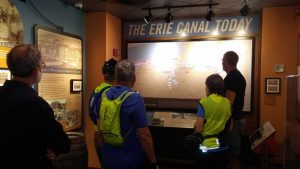 Thanks to the mostly-flat and traffic-free Erie Canalway Trail, the tour offers unparalleled cycling for all ages and abilities.

Covering between 40 and 60 miles per day, cyclists travel along the Erie Canalway Trail, which is now more than 80 percent complete and will, by 2020, be completed as part of the statewide 750-mile Empire State Trail. A recent study shows that the Erie Canalway Trail annually receives close to 1.6 million visits and generates an economic impact of $253 million

Registration for Cycle the Erie Canal includes camping accommodations each evening with restrooms and showers; eight hearty breakfasts and six delicious dinners; two refreshment stops daily stocked with fruit, snacks and beverages; SAG support and baggage transport; daily cue sheets and marked routes; entertainment and historic presentations every evening; and guided tours of the Canal, historic sites, museums, and other attractions. Shuttles will be available at the beginning and the end of the ride to transport riders and their bicycles for an additional fee. Two- and four-day options are available.

The registration fee for the full tour is $835 for adults and $455 for youths ages 6-17 and non-cycling participants.

The New York State Canal Corporation, the agency charged with operating, maintaining and promoting New York’s Canal System and the Canalway Trail, is the Premier State Sponsor of Cycle the Erie Canal. The Erie Canalway National Heritage Corridor is the event’s Heritage Sponsor.