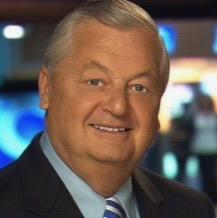 Washington, DC— With Rod Wood set to retire today after more than 50 years in broadcasting, including 44 years at NewsChannel 9, U.S. Rep. John Katko (NY-24) spoke on the floor of the U.S. House of Representatives to honor his remarkable career in journalism.

Rep. Katko’s remarks can be viewed here and found below:

Madam Speaker, I rise today to honor the distinguished career of Central New York broadcasting legend, Rod Wood, and to celebrate his retirement after more than 50 years on television in our community.

Rod Wood is a household name, and trusted source of news throughout Central New York.  For five decades, he has been there to deliver the news – good and bad – to families throughout our community.

Born and raised in Syracuse, New York, Rod Wood’s career started at age nine, when he appeared on children’s television programs while a member of the Syracuse University’s Children’s Theater.

Before beginning his career in broadcasting, Rod proudly served in the U.S. Army with the 504th Military Police Battalion. Following his service, Rod learned the business of broadcasting working at WNDR Radio, Wolf Radio, and WHEN TV and Radio, where he spent ten years.

In 1976, Rod Wood joined NewsChannel 9, and has been a fixture at the station ever since. Rod partnered with Carrie Lazarus on the anchor desk for over 30 years, becoming one of the longest tenured anchor teams in American broadcast history. For this accomplishment, Rod and Carrie were inducted into the New York State Broadcasters Hall of Fame in 2011. After Carrie stepped away from the anchor desk, Rod Wood continued anchoring the news each night with Christie Casciano.

Outside of work, Rod Wood is extremely devoted to his family. Rod stood in support of his wife, Nanette, through her nine-year battle with cancer, and proudly celebrated 52 years of marriage before her passing earlier this year. Together, Rod and Nanette raised five children, and were blessed with 10 grandchildren.

The Dean of Central New York broadcasting, our community will truly miss welcoming Rod Wood into our homes every evening.  He will always be remembered as a fixture in Central New York,and I truly wish him the best in a well-deserved retirement.

Madam Speaker, I ask that my colleagues in the House join me in honoring Rod Wood for a remarkable 50-year career in journalism. I wish him all the best in retirement.