Washington— With Wayne Mahar set to retire in December after 36 years of weather forecasting with CNY Central, on November 17th U.S. Rep. John Katko (NY-24) spoke on the floor of the U.S. House of Representatives to honor his remarkable career.

Rep. Katko’s remarks, as prepared for delivery, can be found below and viewed here.

Madam Speaker, I rise today to honor the celebrated career of Wayne Mahar as he prepares to retire after 36 years of weather forecasting in Central New York.

Wayne Mahar is one of the most recognizable and trusted weather forecasters in Central New York.  When planning a hike, barbeque, tailgate, or family outing, Central New Yorkers have relied on Wayne to share the weather for nearly four decades.

Originally from Brunswick, Maine, Wayne Mahar began his career working for the National Weather Service. From there, he founded Precision Weather Service, a private weather consulting firm that builds forecasts for major events like the MLB All-Star Game, the Super Bowl, and red-carpet events. 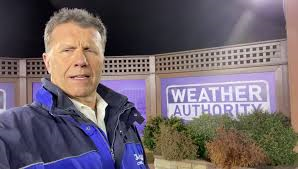 In 1985, Wayne joined the CNY Central broadcast team in Syracuse, becoming the first full-time meteorologist in Central New York. Here, he brought a new level of seriousness to the profession by utilizing computer models and hard science to make his forecasts. Through this approach, Wayne became known for accuracy, reliability, and his outdoor broadcasts from the CNY Central Weather Deck. An expert on severe weather events, Wayne was also there to deliver critical, life-saving information to families during some of the most historic weather events in Central New York, including the Blizzard of 1993 and 1998 Labor Day Storm.

Outside of forecasting, Wayne has been a prominent fixture in our community. He’s an avid hockey player, hosts regular workshops for young aspiring meteorologists, and in 2008, founded the Priscilla Mahar Animal Welfare Foundation. The non-profit organization was named after his late mother and champions animal welfare causes, raising over a quarter of a million dollars for local animal rescues.

For nearly four decades, families like mine have turned to Wayne Mahar when we want to know if there will be sun, rain, sleet – or just another day of lake-effect snow. While he will be dearly missed on our televisions, Central New Yorkers can rest assured they will continue to see him. When he’s not spending time with his children and grandchildren, Wayne has promised he will remain an active part of the community.

Madam Speaker, I ask that my colleagues in the House join me in honoring Wayne Mahar for an incredible career in weather forecasting and wishing him the best in his well-deserved retirement. Thank you.