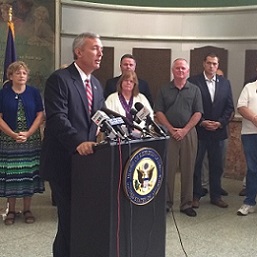 “Our nation’s veterans have struggled with the side effects of Agent Orange for far too long,” said Rep. Katko. “Veterans have risked their lives in dangerous conflicts in order to defend our country. Larry Hackett, among countless other veterans, lost their lives due to complications resulting from Agent Orange. Veterans should not be subjected to the financial burdens created by illnesses this chemical causes.”

Agent Orange, a chemical defoliant used during the Korean and Vietnam wars, has left a large number of veterans who served in these wars with life-threatening diseases and cancers, including Hodgkin’s Disease, Non-Hodgkin’s Lymphoma, Parkinson’s Disease, lung and skin cancers, and Chronic B-cell Leukemia.  There is also increasing evidence that many of the children and grandchildren of these veterans suffer from Spina Bifida, birth defects, and other illnesses.  While many of our nation’s veterans and their families have been greatly impacted by these diseases, many currently do not qualify for the presumption of coverage and lack the necessary benefits to compensate for their service. 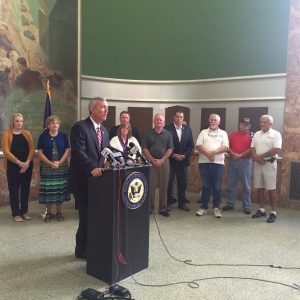 “This bill establishes a task force to properly assess the impact of Agent Orange on our nation’s veterans, as well as hold the VA accountable for the lethal impacts of this substance,” Katko continued. “This legislation honors Sergeant Hackett’s legacy, and will help improve the lives of the veterans and their families who have been afflicted.”

The task force established by Katko’s legislation would require the VA to conduct a comprehensive review and make recommendations about care and compensation based on exposure for veterans and their families.  It forms a national outreach campaign to educate veterans on the medical risks associated with Agent Orange exposure.

“I am proud to re-introduce this legislation and continue my advocacy for all those affected by Agent Orange in our district and across the country,” concluded Katko.