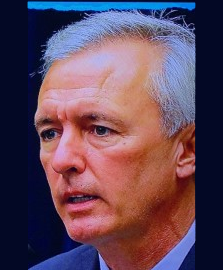 On January 12th, I announced my support for the article of impeachment against President Trump before the House of Representatives. At that moment, I was the only Republican Member of Congress to do so.

I was elected to Congress in 2014, and am serving my 4th term. While a majority of voters in my Central New York district supported Secretary Clinton and Vice President Biden over President Trump, my district is home to some of President Trump’s strongest supporters. Just two months ago, I voted for President Trump myself. For years I have truly heard from all sides. I respect and understand their views.

The decision to impeach a sitting President that millions of Americans, including many of my constituents, voted for is one that I do not take lightly or enjoy. The Founders correctly established a very high bar for impeachment. I voted against the articles of impeachment previously brought against President Trump in 2019, because I found those charges politically motivated, and well beneath the high threshold established for impeachment. I have been vocal over the last 4 years when I disagreed with the President, but am not a ‘Never Trumper’ nor am I part of ‘The Resistance.’ I have simply tried to do my job in what we can all agree has been a tumultuous 4 years.

On January 6th, the nation watched as insurrectionists stormed the U.S. Capitol, threatening the safety of countless individuals and successfully disrupting, albeit temporarily, the certification of Electoral College results. In the midst of the attack, hundreds of Capitol Police officers heroically upheld their duty to defend the United States and protect those who work here. Many officers were severely injured and beaten. And tragically, one officer, Officer Brian Sicknick, lost his life as a result of the violence.

There are many ‘process’ reasons my colleagues cited for not supporting impeachment. There are only a few days left in his term; there has not been a full investigation; and a handful of others. Some in my party believe impeachment would only further divide the country and enrage the President’s supporters. To those who have said this, I ask: what would they have done if President Obama held a rally on the National Mall that resulted in a brutal attack on the U.S. Capitol and in the death of 5 Americans? Would you have asked that we simply move on in the spirit of healing?

I am a former federal prosecutor. That was my life’s work before I ran for Congress. I dedicated my career to upholding the law, bringing lawbreakers to justice, and keeping people safe. We were presented with a vote on whether or not we think there is sufficient evidence to indict the President.  As I always do, I looked only at the facts, not the politics. In the same politically unclouded process I used as a Federal Prosecutor, I came to the conclusion that the President’s role in the insurrection was undeniable. Both on social media ahead of January 6th, and in his speech that day, he deliberately promoted baseless theories that created a combustible environment of misinformation and division. Our nation simply cannot function without the peaceful transfer of power and the recognition of carefully reviewed election results. To allow the President of the United States to incite this attack without consequence is a direct threat to the future of our democracy and to our security.

No one wishes to see our country heal and unite more than I do. Even after one of our darkest days, America remains the greatest nation on earth. I’m not only optimistic, but fully committed to the unity and healing we need. But, first we need to do our jobs. As Members of Congress, we take oaths to defend the Constitution regardless of political party — because at times, it needs defending.