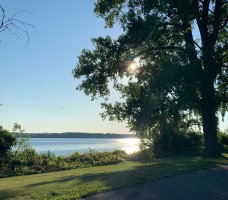 In Central New York and across the country, deferred maintenance on national parks and public lands has led to deteriorating roads, visitor centers, and trails. Simultaneously inadequate annual funding for the LWCF, one of the nation’s most important tools for conservation, has hindered the program’s ability to preserve public lands and increase public recreation access.

“I voted to pass the Great American Outdoors Act, bipartisan legislation I introduced last year that boosts investment in public lands and creates local jobs amid the COVID-19 pandemic,” said Rep. John Katko.  “As an avid outdoorsman, I strongly believe we must take steps to preserve and protect our public lands for future generations. The Great American Outdoors Act serves as a major step forward by fully and permanently funding the Land and Water Conservation Fund and addressing the $12 billion maintenance backlog across our National Park System. In doing so, we will create economic opportunities for Central New Yorkers and provide much-needed investments in our public lands, waterways, and wetlands.”

Last year, Rep. Katko supported passage of the Conservation, Management, and Recreation Act, bipartisan legislation that was signed into law to permanently reauthorize the program.  To support these efforts, Rep. Katko’s Great American Outdoors Act will dedicate significant funding from oil and gas royalties to address maintenance needs within the National Park System and other public lands agencies. The legislation will protect parks and public lands, preserve waterways and water quality, and sustain rural landscapes and economies. At a time in which Central New York is still grappling with the devastating impacts of the COVID-19 pandemic, investing in our public lands will create jobs, help small businesses get back on their feet by increasing opportunities, and provide urgently needed stimulus to the outdoor recreation industry.