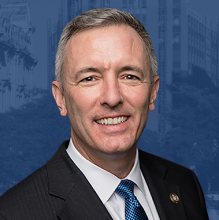 According to multiple reports Republican John Katko  (R-Onondaga) will not run for re-election. In a statement Katko said, “My conscience, principles, and commitment to do what’s right have guided every decision I’ve made as a Member of Congress, and they guide my decision today.” Katko who is one of 10 Republican members of Congress to vote to Impeach President Trump.  12 Republicans have announced they will not run for re-election, along with 26 Democrats.