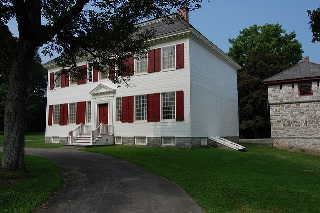 The New York State Office of Parks, Recreation and Historic Preservation (State Parks) today announced the opening of the rehabilitated “Stonehouse” at Johnson Hall State Historic Site in Fulton County, providing newly restored space for the public to better learn about the work and living conditions of some of the enslaved people at Johnson Hall in the 18th century.

“Although the story of slavery is a tragic one, it is an important one to be told,” said State Parks Commissioner Rose Harvey. “The stonehouse project will help illuminate the role of African-American people in shaping the history of the Mohawk Valley and New York State. Dedicating this facility is one way New York State is advancing recognition of our diverse heritage.”

Johnson Hall was the site of three races and cultures of people, Europeans, enslaved Africans and Native Americans who lived, worked and visited this site for trade and diplomatic purposes.  While the primary focus of interpretation at Johnson Hall has been Sir William Johnson and his relationship with Native Americans as the British Superintendent of Indian Affairs, the completion of the stonehouse project will allow the site’s educators to better depict the work and living conditions of some of the enslaved African-American people at Johnson Hall in the 18th century. 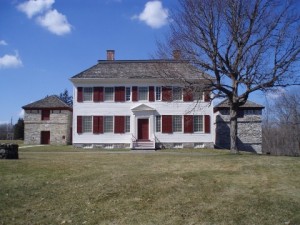 The project is in one of two stonehouses flanking the main 1763 estate that were built as defenses against attack on the frontier. The $324,000 renovation of the site’s southwest stonehouse replaced the 1960-80s finishes and fixtures with a more historically appropriate appearance – including construction of a working fireplace based on the archaeological remains of a fireplace discovered in the basement of the northeast stonehouse; new 12” white pine plank floors, affixed with reproduction rose head nails; refurbished windows; and period appropriate door lock, hand forged hinges and latches, fireplace crane and cast iron fire back. The building has been unused for more than a decade.

This room will also provide the site a hands-on classroom space to deliver new interpretive programs, and workshops for children and adults related to slavery in 18th Century Colonial New York, as well open hearth cooking, herbs as food and medicine and sewing workshops, and can serve as focal point for events, such as the site annual Open House during Johnstown’s Colonial Stroll in December.

State Parks will also work to foster partnerships with other historic sites with similar interpretive themes, to attract a larger African American audience by offering lectures, site specific and regional tours, symposium and special events that specifically focuses on slavery and the material culture of the enslaved in Colonial New York.

“The one element at this site that is missing is the story of the slaves,” said Wanda Burch, President of Friends of Johnson Hall.  “Sir William Johnson was the second largest slave-holder in the state and that’s a story that simply has to be told.  It’s something people do not understand and may not be comfortable with, but we need to be able to tell the entire story.”

The project was funded by Governor Andrew M. Cuomo’s NY Parks 2020 program, a multi-year commitment to leverage $900 million in private and public funding for State Parks and state historic sites from 2011 to 2020. The 2016-17 State Budget allocates $90 million toward this initiative. In addition, this year the Governor announced the Connect Kids to Parks program, which provides free day-use park entry to fourth-grade students and their families, and creates a new transportation grant program to help students from underserved schools visit state parks and historic sites.

The New York State Office of Parks, Recreation and Historic Preservation oversees 180 state parks and 35 historic sites, which are visited by 65 million people annually. For more information on any of these recreation areas, call 518-474-0456 or visit www.nysparks.com .