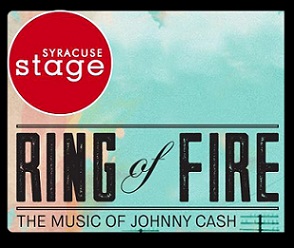 SYRACUSE, NY – Known by legions of fans as “the Man in Black,” artist and performer Johnny Cash was a musical jack-of-all-trades. A singer, songwriter, and guitarist all in one, his music incorporates country-western sounds with gospel and blues influences. Syracuse Stage celebrates this American icon with “Ring of Fire: The Music of Johnny Cash,” an addition to the theater’s 2016/2017 season.

This musical adaptation compiled of Cash’s greatest hits opens on June 9 in the Archbold Theatre at the Syracuse Stage/SU Drama Complex, 820 E. Genesse St. Preview performances are June 7 and 8.

Created by Richard Maltby, Jr., conceived by William Meade and directed by Randal Myler (originally directed by Jason Edwards), “Ring of Fire” is composed of classics such as “I Walk the Line,” “Folsom Prison Blues” and “Cry, Cry, Cry”. This adaptation is made entirely of song and the actors play their own musical instruments, including harmonicas, fiddles, guitars, mandolins and drums. 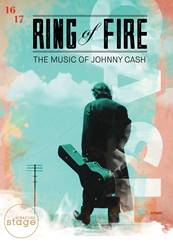 “They are performers, as well as skilled musicians,” said Bob Hupp, artistic director, Syracuse Stage. “So you are really getting great musicians to come here and bring the music of Johnny Cash to life.”

Hupp’s interest in “Ring of Fire” came from his experience working on its revival at the Arkansas Repertory Theatre. He’s seen the show multiple times and has since come to understand the value of Cash’s music. The broad range of Cash’s musical talents are what Hupp believes make “Ring of Fire” appealing to all ages.

“There’s a depth to his artistry, from his country roots to the man he became,” said Jill Anderson, managing director, Syracuse Stage. “He’s a lion in our culture with appeal that extends beyond the music alone.”