As stunning as his victory 8 years ago winning the Presidency, President Barack Obama’s term in over. On January 20th America welcomes its 45th President, Donald J. Trump.  But before leaving the White House both President Obama and First Lady Michelle Obama gave speeches that reminded us why there’s a sense of loss. And with that loss is mourning. We were uplifted by the promise of hope and Change, and that we got.

Hope in the belief that President Obama could fulfill his promises of providing health care for the millions of uninsured. Change in the expansion of rights for the LGBT community, a sympathetic Justice Department, the appointment of a diverse cabinet reflecting the mosaic of America, and saving the nation from absolute economic ruin by leading us through the worst financial climate since the Great Depression. 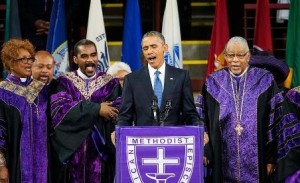 A nation who’s economy was in freefall. The United States of America was shedding jobs at 100,000 a month. The auto industry was on the verge of collapse, there was talk of a nation without a resident auto industry. Bankers and financial wizards on Wall Street sold bad paper, investor groups selling homes that people couldn’t afford. As unemployment soared the Stock Market tanked, the NY Stock Exchange hovering at 7,000 after losing half its value.

Overnight the value of Americans 401k retirement accounts shrank. Some Americans were financial wiped out. Hundreds of thousands of homes were foreclosed on, the result of the zealous unchecked power of the banking and housing industries.

Add to the aforementioned, a pledge by Republican Party elected leadership to obstruct everything President Obama proposed. Imagine that scenario for your first day on the job! 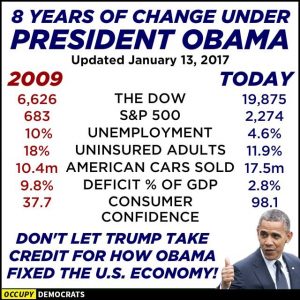 That’s quite a list of accomplishments. He didn’t satisfy those who thought he could have done more directly for the African-American Community. However, those detractors don’t understand the limitations of Presidential power and the role of congress.

In the Obama’s farewell, we were told that we are the change and now it’s up to us to continue.

And finally a message to his daughters:

Those words are applicable to us all who’ll miss this President.