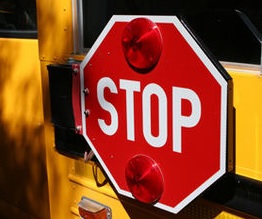 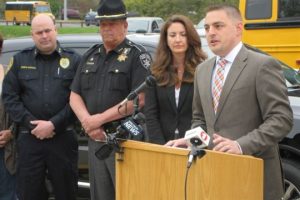 “Every day school is in session our school bus drivers see drivers putting children in danger by illegally passing stopped school buses,” said Mike Martucci, President of the New York School Bus Contractors Association. “A single incident is one too many, and drivers need to realize that they must stop when they see those red lights flashing on a school bus.”

“Our number one priority is the safety of all students riding our school buses and we are proud to join with school districts, law enforcement, and local and state lawmakers to call attention to the dangers of illegally passing a stopped school bus.”

The New York School Bus Contractors Association is also using the occasion to again call for the passage of legislation sponsored by New York State Senators Rich Funke (District 55) and John Bonacic(District 42) to increase the penalties on drivers convicted of illegally passing a stopped school bus.

Although drivers ticketed for a first offense face up to 30-days in jail, as much as a $400 fine, and a 5-point penalty on their drivers’ license, it is clear the current penalties do not go far enough to act as a deterrent.

Senator Funke’s legislation (S.1023) would increase the range of fines for illegally passing a stopped school bus from a minimum of $400 to a maximum of $1500, depending on the number of convictions. The legislation also requires that a person who injures someone while passing a school bus be charged with aggravated vehicular assault, and if a person is killed in the incident, the legislation requires a charge of criminally negligent homicide.

“School bus drivers work hard every day to protect the students they transport and it’s on all of us to ensure that our kids are every bit as safe when entering or exiting a bus,” said Senator Rich Funke (R-C-I, Fairport). “Operation Safe Stop is an important tool to remind drivers that the law is clear: when you see a school bus’s red flashing lights, you must stop, no matter where on the road the bus is. Together with legislation I have proposed to crack-down on drivers who pass a stopped bus, this effort will go a long way to prevent avoidable tragedies across the state.”

Senator John Bonacic’s legislation (S.1064) calls for the additional penalty of a 60-day suspension of a person’s drivers’ license when that person is convicted of illegally passing a stopped school bus two or more times within a 10-year period.

“Increasing penalties on those who would put our school children in harm’s way by speeding past a stopped school bus is a no-brainer,” said Senator John Bonacic (R-C-I, Mount Hope). “I’m proud to once again sponsor this legislation in the Senate because I know that it will protect our kids. I will continue to work with the advocates, and my colleagues in the legislature to get this bill passed.”

“The most valuable resource in any community are its children. We must always educate and equip ourselves with the tools we need to ensure a safe environment for our kids,” said Senator Bill Larkin (R-C, Cornwall-on-Hudson).

“It is very unfortunate that even with all the safety features of today’s school buses, including video cameras and stop arms, drivers are still illegally passing school buses,” said New York State Bus Distributors Association President, Paul Daniels.  “We proudly support Operation Safe Stop and call on New York drivers to be more aware of the importance of stopping when they see the red lights flashing on a school bus.  We look forward to continuing to work with the state legislature to increase penalties on those who illegally pass a school bus.”

“The single most important thing that we do as school bus contractors is to provide the safest ride possible to and from school,” concluded Martucci. “It is obvious, given the large numbers of drivers who continue to ignore the law and illegally pass a stopped school bus, that more has to be done to make that ride even safer. We are optimistic that the state legislature will pass tougher laws on those drivers who put our children in danger and ask that all New Yorkers pay close attention and use caution whenever they see a school bus out on the road.”