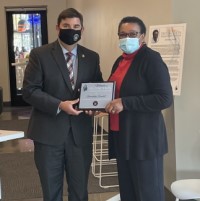 Gwen Dowdell served in the Syracuse Police Department for 20 years, and worked as a Detective and investigator in the Domestic Violence Unit, the Child Abuse Unit and the Missing Persons Unit. She retired from the police department in 2007 but continued her service as a School Resource Officer at Corcoran High School and later as security official at Onondaga Community College.

Senator John W. Mannion said, “As a member of the Syracuse PD, Det. Gwen Dowdell took on the most difficult cases; she built bridges between the community and her department while dedicating herself to protecting our most vulnerable neighbors. In our schools, she became a role model while protecting our kids. Gwen Dowdell is a true Woman of Distinction and deserves our praise, respect, and gratitude. She has never stopped making this community a better and safer place and she is clearly one of Central New York’s finest citizens.” 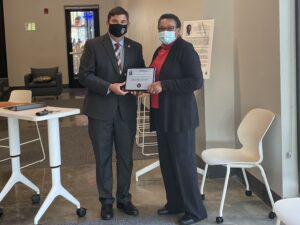 Detective Dowdell is a past Vice President of Camp 415, an organization of African-American law enforcement officers who seek to strengthen relationships – and awareness – between police and the community. Camp 415 honors the badge number of Wallie Howard, a beloved Syracuse Police Officer who was killed in the line of duty.

Randi Bregman, the Co-Executive Director of Vera House said, “Gwen was one of the most caring, committed police officers I ever worked with. She went above and beyond to try to get victims help and support and to hold offenders accountable.  She had a way with people and made them feel like they mattered to her.”

For that work, Gwen received the Sister Mary Vera Award, dedicated to citizens who serve those affected by domestic and sexual violence while emulating “the humility, gentleness and humanitarian spirit reflected by Sister Mary Vera.”