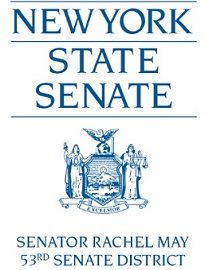 Albany, NY – Senator Rachel May (SD-53) is proud to announce the appointment of Darren “Hal” McCabe as the new Director of the Legislative Commission on Rural Resources.

“I am excited to welcome Hal McCabe to the Commission and looking forward to working with him to promote the interests of rural communities across the state,” said Senator May. “Hal has been a vigorous advocate for the quality of life in rural Central New York for years and has earned the respect of farmers, educators, and leaders throughout the state. He will bring great energy and visibility (pun intended) to this position.”

Mr. McCabe has an impressive resume of public service and a long history of advocating for rural issues. He was most recently the Director of Outreach at NY FarmNet, where he led legislative efforts to help New York’s farmers survive and thrive in today’s challenging economy. Prior to FarmNet, he oversaw nine counties for former Congressman Michael Arcuri. Mr. McCabe is the current Mayor of the Village of Homer in Cortland County. He attended Ithaca College, where he received a Bachelor of Science degree in Communications and Public Relations, and then went on to graduate studies in Political Management at George Washington University.

As a native of Upstate New York, Mr. McCabe has a lifelong love for the area. He is an avid hunter and loves camping in the Adirondacks.

“I am honored to have the opportunity to serve as Director of the Legislative Commission on Rural Resources,” said Hal McCabe. “I’ve been a vocal advocate for Upstate New York my entire life and I look forward to broadening my focus to help our rural communities across New York State. I am excited to work with the members of the Commission and the Legislature to continue the great work of bringing positive change to New York’s rural regions.”

As Director, McCabe seeks to continue the good work the Rural Resources Commission has done in recent years, which has made it one of the primary advocacy and policy bodies in Albany representing the interests of New York’s rural communities.