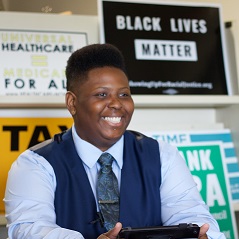 Rahzie Seals declared her candidacy for fourth district councilor on Friday, May 19 at 1:00 PM at the Green Party Office at 2617 S Salina St

Rahzie Seals unveiled her plan for a “Syracuse where our voices Matter”.

“In a Syracuse where all Black lives matter, EVERYONE’s life will matter. When we make sure that the most historically marginalized and oppressed have equal opportunities and a path to justice and fairness, then we achieve the ideal society where everyone matters.

We cannot deny the racial inequality in Syracuse. Syracuse ranks number one in the United States for concentrated poverty for Black and Latin people. There is no way to solve the problems of poverty without addressing the root causes. 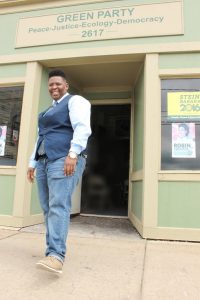 My campaign calls for economic justice through living wages and job opportunities. It calls for community control from internet services to the police. It calls for investment in the things that my community needs: education, jobs, and health resources. It calls for divesting from what we don’t need: More local law enforcement that are NOT being held accountable for their actions, anchor institutions not paying their fair share in wealth, and political figures who say they care about our city but really don’t.  My campaign calls for the defense of neighborhoods against predatory developers and gentrification.”

Serena “Rahzie” Seals (age 33), was born and raised in Syracuse, NY and is a native of the city’s South Side. She comes from a family with a long-standing history of public service in the city. She seeks to follow the footsteps of her father, former fourth district councilor Thomas Seals who also served as a police officer for 30 years, but with her own cadence. Serena is a promoter, organizer, and activist dedicated to social justice.

She is one of many key members of BLM Syracuse. Serena went to Corcoran High School and has a background in communication, having studied public relations and media arts at Monroe Community College. She is the founder of BlackCuse Pride, an organization committed to providing access to entertainment, community resources and creating an inclusive, welcoming environment for LGBTQ people of color communities in Syracuse.