SYRACUSE, NY – Consensus, the commission on local government modernization, launched a series of community conversations across Onondaga County on the future of local governance. A special meeting was held in the City Hall Commons Atrium on Wednesday, March 11, from 12:15 to 1:30pm. and Southwest Community Center, Thursday, March 12, 2015 6:00 pm

This was the first of several events which will be held throughout the county to engage the public and gain input following the release of the commission’s countywide baseline review of local government services. Onondaga County is the first location in New York to undertake this kind of review and community conversation.

For those unable to attend the previously held March sessions, the commission has also announced additional meetings:

Future meetings will be shared with the news media and via www.consensuscny.com.

“Connecting with the community and getting participants to share their thoughts and perspectives is critical for the commission to create the best recommendations,” said Melanie Littlejohn, regional executive director of National Grid, and chair of the public engagement committee for Consensus. “We want to hear from people across our county because this community belongs to all of us and, ultimately we will all be impacted by the resulting recommendations.”

The kick-off session, featuring a special presentation by Dr. Joseph Stefko, of the Center for Governmental Research, will detail the commission’s newly published “Consensus Baseline Review: Who Does What & What it Costs.”

“Through this series of events we hope the community will come learn about where we are right now, help provide some creative ideas around where we can and should be, and how we get there,” said James Walsh, co-chairman of Consensus. “It is important for us to make sure we get to the right recommendations and to do so we must have significant engagement from this community.”

“The Baseline Review provided a detailed snapshot of our local government, its structure, costs and benefits,” said Neil Murphy, co-chairman of Consensus. “Now is the time to have a thoughtful community-wide dialogue about this data and begin exploring a wide range of solutions to make government easier to use, more responsive, more cost effective, provide better services, and ultimately achieve better outcomes.” 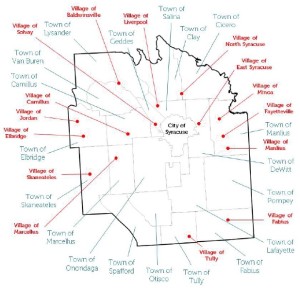 Public Works: Local governments in Onondaga County spent a combined $140.9 million on public works services in 2013. The Metropolitan Water Board, OCWA and Syracuse Water Department collectively supply water to approximately 90% of Onondaga County residents. The region is served by 36 public works departments; the smallest is responsible for 1 mile of road; the largest has 794 miles.

Judicial & Court Services: Onondaga’s county, city, town and village governments spent a combined $18.3 million on judicial and court services in 2013. In NY, county and city court costs are state-funded, but town and village courts are funded at the municipal level. There are 28 justice courts across Onondaga County. Each of the 19 towns and nine of the 15 villages has its own.

Consensus has actively engaged more than 500 people in its work, to date, including local officials and interested community groups. Over the next few months, the commission will continue to seek significant public participation.

“There is a lot of enthusiasm for the work that is being done and in many cases we are not starting a new conversation but instead advancing an ongoing dialogue,” said Catherine Richardson, co-chairman of Consensus. “We want to continue to these conversations and openly exchange ideas. This community has the opportunity to drive real actions leading to real change and I am proud of the work that has been done to date.”

In addition to the sixteen community and business leaders, and the three co-chairs leading Consensus there is broad support from community partners including: SYRACUSE 20/20, CenterState CEO, FOCUS Greater Syracuse, the League of Women Voters of Syracuse Metropolitan Area, Onondaga Citizens League and the Homebuilders & Remodelers Association of CNY.

The commission is expected to make its recommendations by the end of 2015.