At a ceremony on November 5th  at the Rosamond Gifford Zoo at Burnet Park, Gifford Foundation board president Larry Bousquet and Allyn Foundation board member Eric Allyn announced the recipient of the 2015 Kathy Goldfarb-Findling Leadership Award, jointly awarded by the two Foundations. Sharon Owens, executive director of Southwest Community Center, is the 2015 recipient of “The Kathy,” which is awarded to nonprofit leaders who are creative, collaborative and embrace change. Named in honor of the late executive director of Gifford, who also served as director of strategic initiatives at the Allyn Foundation, the award provides a $3,000 honorarium for the recipient’s personal use – whether for professional development or personal growth opportunities. 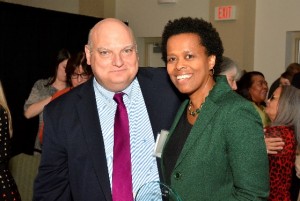 The Kathy award was created in 2011 at the time of Ms. Goldfarb-Findling’s retirement to recognize her special approach to leadership: to be nimble and creative; to encourage lifelong learning; to embrace leaps of faith and not fear failure; to work “with” not do “for”; to fully engage in collaborative approaches and to at all times believe passionately in the power of change and personal growth. Previous recipients of “The Kathy” are Catholic Charities executive director Michael Melara (2011), Mary Ellen Clausen, founding director of Ophelia’s Place (2012), Randi Bregman of Vera House and Mary Beth Frey of Samaritan Center (both 2013) and Kerry Quaglia of Home HeadQuarters (2014).