Friday evening in the City of Syracuse, NY excessive force was used by three Syracuse City Police Officers while performing a routine traffic stop for a noise ordinance at the intersection of Grace St. and Oswego St. 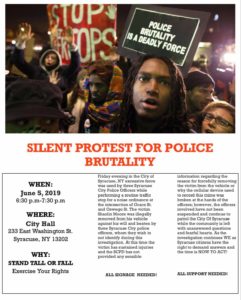 The victim Shaolin Moore was illegally removed from his vehicle against his will and beaten by three Syracuse City police officers, whom they wish to not identify during this investigation. At this time the victim has sustained injuries and the SCPD has not provided any sensible information regarding the reason for forcefully removing the victim from the vehicle or why the cellular device used to record this crime was broken at the hands of the officers; however, the officers involved have not been suspended and

continue to patrol the City Of Syracuse while the community is left with unanswered questions and fearful hearts.

As the investigation continues WE as Syracuse citizens have the right to demand answers and the time is NOW TO ACT!