Due to COVID-19 pandemic, annual event will be streamed without live audience

Syracuse, N.Y. – Syracuse Mayor Ben Walsh will deliver the 2021 State of the City on Thursday, Jan. 21 at 7 p.m., from the newly-constructed Salt City Market in downtown Syracuse. The address will be livestreamed without an in-person audience due to the COVID-19 pandemic. The annual report from the Mayor of the City to the Common Council is required by the City’s charter. The State of the City will be presented live on the Office of the Mayor-Facebook Page, YouTube and broadcast on Ch. 24 WCNY.

This year Mayor Ben Walsh has selected City Market as the venue for the annual message. The Salt City Market is a food hall and public market featuring cuisines from around the world offered by ten local businesses, as well as a coffee shop/bar operated by Salt City Coffee. The building also includes 26 mixed-income apartments and a grocery store. The Syracuse Co-op will open in the spring. Located at the corner of South Salina and West Onondaga Streets, the Market is scheduled to open next week.

The following is an excerpt from Mayor Walsh’s State of the City address, featuring the success story of Sleyrow Mason, of Soul-utions, Sley’s Southern Cuisine.

Walsh: “I’m speaking to you tonight from the Salt City Market in downtown Syracuse.  This project – new construction at the corner of Salina and Onondaga Streets – rose up during the pandemic.  It was a concrete pad and steel girders last March, and today it is the embodiment of our vision for the City of Syracuse and the community cooperation that is making that vision possible. 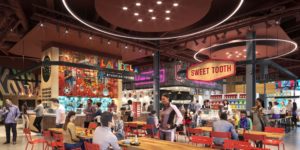 Later this month, a food hall and public market featuring cuisines from around the world will open here.  The building will also offer 26 mixed-income apartments and a downtown grocery store.  It’s a $25 million project funded by the Allyn Family Foundation, which created a new cooperative entity, the Syracuse Urban Partnership, to own and operate the Market.

This investment is inspiring.  So are the stories of the people working on the project.  Ten small business owners selected through a competitive process hailing from places all over the world: Southeast Asia, the Middle East, the Caribbean, and from right here in Syracuse.

People like Sleyrow Mason, a city resident fulfilling a lifelong dream through the Salt City Market.

Sley’s childhood began on the streets of Crown Heights in Brooklyn.  His family moved to Syracuse when he was 17 to give Sley and his six siblings a chance at a better future.  He graduated from Corcoran High School.  He attended SU for two semesters, but with a newborn son and a mother needing help, he had to go work.  He found a full-time job in nursing home care and discovered he loved helping people. 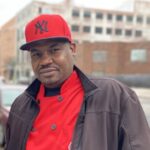 Sley’s true passion though, was cooking and after about ten years as a CNA, he switched to the restaurant business where he gained experience at several local restaurants.  Through hard work, he made it to kitchen manager at the new Marriott Syracuse Downtown just across the street from here.  It was there, that Sley learned about the Salt City Market opportunity.  He competed for a spot and won.

Later this month, Sleyrow Mason will open “Soulutions, Sley’s Southern Cuisine.” He’s serving his unique take on soul food to our community and hiring local people.  For Sley, who lives on Syracuse’s east side, it puts together a lifetime of helping people with his passion for cooking.  Congratulations, Sley.  I wish you and all the others starting your businesses here at the Salt City Market happiness and success.  “