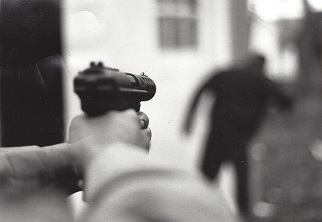 On Saturday, June 12th, 2021, at around 6:20 P.M., Sgt. J Giarrusso and Officers C. Nellis, R. Bebernitz, B. Hanks, J. Lafaver, W. Coleman, and J. Harriman, from the Gun Violence Suppression Detail, worked to solve a robbery case and remove another gun from the street.

From a point of surveillance, Officers observed two males rob another male while displaying a gun in the 100 block of Dudley Street. After the robbery, the suspects left the area with proceeds from the victim. Officers quickly located one of the suspects, Kamy Paul, 22, and placed him in custody. During the search of Paul, he was found to be in possession of a loaded firearm and illegal drugs. This suspect was arrested and lodged at the Onondaga County Justice Center for the following charges: ​

Robbery in the First Degree

Through investigation, the other involved suspect​ was identified as a 16-year-old male. The male was known to be on probation with a tracking device. With that, Officers quickly found the suspect, and he was detained at his residence in Baldwinsville. The 16-year-old male was later arrested and charged with ​Robbery in the First Degree. The juvenile suspect was lodged at the Hillbrook Detention Center.