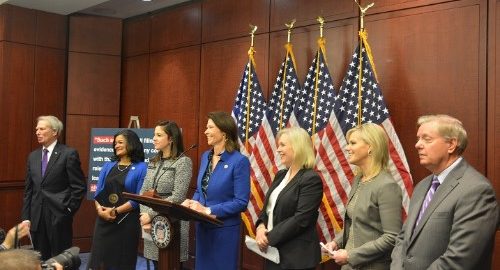 Bipartisan Legislation, Co-sponsored By Gillibrand, Graham, Murkowski, And Harris, Would Invalidate Forced Arbitration, Bring Sexual Harassment And Discrimination Claims Out Of Secret Settlement Process And Into The Light Of Day To Help Eliminate Institutionalized Protections For Abusers

Washington, DC – On Tuesday December 6th, U.S. Senator Kirsten Gillibrand and U.S. Representative Cheri Bustos today stood with Gretchen Carlson, acclaimed TV journalist and women’s empowerment advocate, U.S. Senator Lindsey Graham, and a bipartisan group of members of Congress to announce legislation to prevent sexual harassment in the workplace. The Ending Forced Arbitration of Sexual Harassment Act of 2017 would void forced arbitration agreements that prevent sexual harassment survivors from getting the justice they deserve. Carlson, who previously hosted “Fox & Friends,” left the network after enduring years of sexual harassment by powerful men who used forced arbitration to institutionalize protections for sexual harassers and prevent survivors from discussing their cases and taking them to trial. 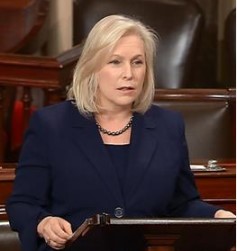 “When a company has a forced arbitration policy, it means that if a worker is sexually harassed or sexually assaulted in the workplace, they are not allowed to go to court over it; instead, they have to go into a secret meeting with their employer and try to work out some kind of deal that really only protects the predator. They are forbidden from talking about what happened, and then they are expected to keep doing their job as if nothing happened to them. No worker should have to put up with such an unfair system,” said Senator Gillibrand. “I am proud to lead this bipartisan legislation to finally get rid of forced arbitration for sexual harassment and sexual assault in the workplace, and I urge all of my colleagues to join our effort, take this problem seriously, and support this important bipartisan bill.”

“If we truly want to end sexual harassment in the workplace, we need to eliminate the institutionalized protections that have allowed this unacceptable behavior to continue for too long,” said Representative Bustos. “Whether it’s on factory floors, in office buildings or retail businesses, 60 million Americans have signed away their right to seek real justice and most don’t realize it until they try to get help. Our legislation is very straightforward and simple – if you have been subjected to sexual harassment or discrimination in the workplace, we think you – not the employer – should have the right to choose to go to court. While there are a lot of good companies that take sexual harassment seriously and work to prevent it, this legislation will help root out bad actors by preventing them from sweeping this problem under the rug.” 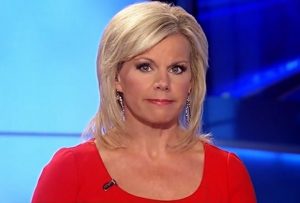 “Forced arbitration is a harasser’s best friend,” said Gretchen Carlson, advocate for workplace equality and the empowerment of women. “It keeps harassment complaints and settlements secret. It allows harassers to stay in their jobs, even as victims are pushed out or fired. It silences other victims who may have stepped forward if they’d known. It’s time we as a nation – together – in bipartisan fashion give a voice back to victims.”

“To expect change without pushing for change is unrealistic. This legislation takes off the table the ability of employers to mandate arbitration before claims even arise,” said Senator Graham. “Mandatory arbitration employment contracts put the employee at a severe disadvantage. I do not oppose arbitration – if the parties willingly consent to the process. Ensuring that sexual harassment and assault claims cannot be negotiated away before they occur will create incentives to change the workplace environment, making it less hostile and more respectful.”

“Sexual harassment and misconduct should not be allowed by anyone, and it should not occur anywhere, especially the workplace,” said Senator Harris. “Forced arbitration has long been used to silence victims and to hide such abuse. It’s time we ended this practice, bring transparency into the process, and create a climate that will allow workers to be safe and protected.” 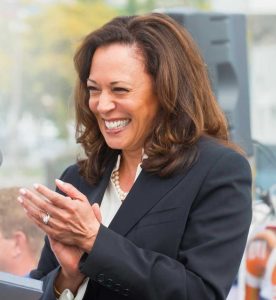 “We must do everything we can to stop sexual harassment in the workplace, and improve and strengthen protections for victims for sexual harassment and sex discrimination. Every workplace should be a safe-haven for employees, free from any kind of harassment,” said Senator Murkowski. “I’m proud to be a co-sponsor of the Ending Forced Arbitration of Sexual Harassment Act, ensuring that the victims have the support they need. For too long, the system has been set up unequally to side with the employer, rarely allowing employees to have equal footing. This bill gives employees back their rights, enabling them to pursue the path they deem necessary towards justice. While we work to change the culture that has tolerated a blind eye to these wrongful acts, we must continue to stand together to support victims and hold people accountable for their actions.”

“Mandatory arbitration silences victims. It limits opportunity, protects powerful men and breaks the leadership ladders that we work so hard to build to help marginalized people succeed, in all industries and all political parties. Through this legislation, we are taking the first steps toward changing this deep-seated culture of sexism and silencing,” said Representative Jayapal. “The bravery of the victims who have come forward cannot go unnoticed. For them — and for all people who experience harassment — we must act on this moment and end the mandatory arbitration process.”

“It is only fair and right that victims have the legal option to pursue charges if harassed in the workplace,” said Representative Jones. “It is time we give them their day in court.”

“Story after story continues to come forward detailing shocking realities about the pervasiveness of workplace sexual harassment,” said Representative Stefanik. “I share the outrage of Americans across our nation at these revelations and commend the brave men and women who have stepped forward to shine a light on this epidemic. This bill will help protect victims by giving them the opportunity to come forward publicly and have their stories heard. And by shedding light on these crimes and their perpetrators, this bill will also help prevent these disgusting crimes from ever taking place. As policy makers, it’s time for us to join together and put an end to sexual harassment and discrimination in the workplace.”

The Ending Forced Arbitration of Sexual Harassment Act of 2017 is endorsed by the American Association for Justice (AAJ), National Women’s Health Network, Women Employed, Public Citizen, and Impact Fund. A copy of the bill can be found here.