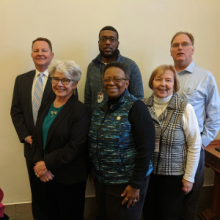 Yesterday, the Republican Caucus of the Onondaga County Legislature surrendered their authority over policymaking and fiscal control, to the Chief Fiscal Officer, an unelected political appointee.  The Democratic Caucus stood unanimously against this last-minute addition to the Legislative agenda.

CSEA members have for months been willing to negotiate furloughs rather than layoffs. The Democratic Caucus now calls upon the County Executive to negotiate with the various bargaining units to prevent up to 250 County workers from joining the ranks of the unemployed, thus losing their health insurance during a pandemic.

An already depleted workforce may now become even less able to serve the citizens of Onondaga County.

Transparency was also on yesterday’s agenda.  The Democratic Caucus has for years advocated for live-streaming of Legislative sessions and Committee meetings. A resolution was put forth last month by the Democrats, led by Legislator Vernon Williams, to live stream all sessions and committee meetings and have them preserved on the Legislative website. In a bipartisan effort, Legislator Williams worked across the aisle to modify the resolution. The Legislative sessions will now be live-streamed and preserved on the website. Committee meeting minutes will continue to be posted there.  We applaud Legislator Williams and the entire legislature for taking this first step towards full transparency.

Yesterday’s session also confirmed the end of the opportunity for Legislator Chris Ryan’s citizen-led, nonpartisan redistricting commission which would have ended the practice of gerrymandering. Instead, the Republican Caucus passed a redistricting resolution that left the Charter unchanged, merely adding the words “recommending” and “encouraging” to what amounts to a continued partisan process. While it is true that citizens who would like to participate in this process are encouraged to apply to be part of the reapportionment commission, no more than 3 will be selected, not randomly, but by elected officials. The Democratic Caucus stood united against this resolution.

The statement above is released by Democratic Floor Leader Linda Ervin. 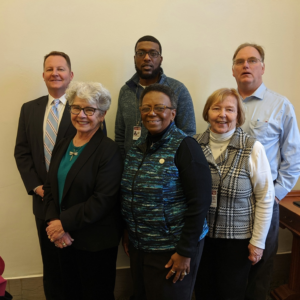