“I am honored to serve the people of New York as acting Attorney General. The work of this office is critically important. Our office has never been stronger, and this extraordinarily talented, dedicated, and tireless team of public servants will ensure that our work continues without interruption.” 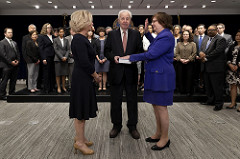 Acting AG Underwood was sworn in on May 8, 2018 by NY Chief Judge DiFiore. Underwood’s husband Martin Halpern held the Tanach.

She has served as Chair of the Executive Committee and Chair of the Council on Criminal Justice of the New York City Bar Association. She was Professor of Law at Yale Law School, Visiting Professor at New York University School of Law, and Adjunct Professor at Brooklyn Law School. She was a law clerk to Chief Judge David L. Bazelon of the U.S. Court of Appeals for the D.C. Circuit and to Justice Thurgood Marshall of the U.S. Supreme Court. She received a B.A. from Harvard University (Radcliffe College) and a J.D. from Georgetown University Law Center, where she graduated first in her class.