On the evening of Wednesday August 3, after the demolition of another Cayuga-held property nearby, at least 20 armed members of the non-Native “Cayuga Nation Police” targeted a farmhouse at the direction of Clint Halftown and the Halftown Council. This house was the home of Wanda John, a Gayogo̱hó꞉nǫ’ (Cayuga) elder.

The armed mercenaries entered without a warrant and hauled Ms. John out of her home so violently that they injured her. Once outside, the mercenaries threw her to the ground, stepped on her head, and then zip-tied her wrists together and placed her in a vehicle. The mercenaries forced Ms. John to watch their destruction of her home: a Halftown Enterprises pay loader demolished all 4 corners of the house, destroying its structure and rendering it uninhabitable. They also destroyed a barn on the property used by the traditional Gayogo̱hó꞉nǫ’ community and citizens to gather for their ceremonies, and a garden shed. Ms. John’s injuries required emergency medical attention.

Contemporaneous with the demolition of Ms. John’s home, Halftown’s mercenaries attacked another Indigenous woman with “bear spray,” an extremely potent capsaicin-based weapon. When she arrived at the emergency room, the medical staff did not have knowledge of effective treatment for capsaicin-related injuries, which prolonged her needless suffering. 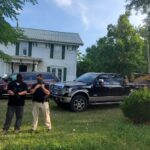 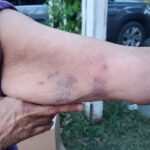 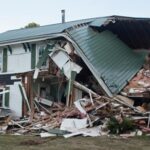 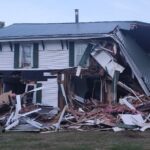 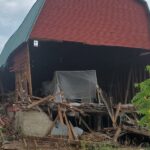 Aftermath of destruction of barn 1 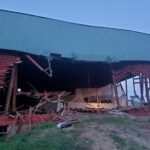 Aftermath of destruction of barn 2

The Halftown Council immediately issued a news release, rife with falsehoods, to put their own spin on these awful actions. For example, Halftown’s press release claims that the Varick house was unoccupied, “dilapidated,” and “an eyesore and an unsafe uninhabitable property”. In fact, the Halftown Council has known for years that Ms. John and several other Gayogo̱hó꞉nǫ’ citizens were living at the Varick house, that traditional ceremonies were held on the property, and that the house was in good condition- even the Seneca County attorney, who was on-site during these events, stated that the house “was in good condition” before the Halftown Council directed its destruction.

Halftown’s news release also notes that they “ensur[ed] that the residence was unoccupied” prior to its destruction. This manipulative phrasing avoids the truth: that they violently removed the elder resident before destroying her home. In reality, the Halftown Council cared so little about safety and security that they did not even disconnect the electricity or propane lines to the Varick house prior to its haphazard destruction. This placed all present at risk and required county officials to handle these additional safety violations.

Unfortunately, these events are just the latest in ongoing violent demolitions targeting the traditional community and its citizens, all of which were undertaken at the behest of Clint Halftown and the Halftown Council. In 2016, the United States’ Bureau of Indian Affairs (BIA) improperly appointed Mr. Halftown as the “federal representative” of the Cayuga Nation, overthrowing the centuries-old traditional governance system of Chiefs and Clan Mothers.

The Gayogo̱hó꞉nǫ’ Chiefs have informed the BIA numerous times over the past decade-plus that Clint Halftown and the Halftown Council have been properly removed from any and all leadership positions (pursuant to their centuries-old dispute resolution mechanisms), including during the time prior to Mr. Halftown’s recognition as the federal representative. The chiefs have repeatedly and publicly stated that Mr. Halftown and the Halftown Council have no authority to communicate or interact with the United States on behalf of the Cayuga Nation. Nevertheless, the BIA continues to stand idle while these attacks on Gayogo̱hó꞉nǫ’ people persist.

The traditional Gayogo̱hó꞉nǫ’ community and citizens in Seneca County are extremely concerned that these demolitions are just the beginning of yet another campaign of destruction ordered by Clint Halftown, and that their homes and families are likely to be targeted and attacked next.