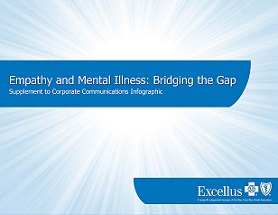 SYRACUSE, N.Y. — Sixty percent of upstate New York adults feel people are caring and sympathetic to those who suffer from mental illness, according to research findings issued today by Excellus BlueCross BlueShield. A closer look at the data reveals a less rosy view from people who have mental health issues.

“There’s an empathy gap when it comes to mental illness,” said Ann Griepp, M.D., Excellus BlueCross BlueShield medical director for behavioral health management. “Our analysis of public survey data shines a light on the need for society to bridge that gap.”

The National Alliance on Mental Illness (NAMI) defines mental illness as a condition that affects a person’s thinking, feeling or mood, and may affect an individual’s ability to function and relate to others.

“One in five U.S. adults experiences a mental health condition over the course of a year, making mental illness more common than cancer, diabetes or heart disease,” said Griepp. “The myths and the stigma that surround mental illness can result in feelings of shame and isolation that can cause affected persons to deny symptoms, delay treatment, and refrain from taking part in daily life.”

According to NAMI, less than half of U.S. adults who had a mental health condition received treatment last year. Excellus BlueCross BlueShield’s review of the CDC data found that in upstate New York, 15 percent of adults are currently taking medication or receiving treatment for mental illness.

Medication reminders, such as pillboxes with alarms and smartphone notification apps, can help remind people of their need to take their medications as directed.

“In addition to encouraging people who have a mental illness to get treatment, we can help bridge the empathy gap by reframing how we think about mental illness,” said Griepp. “We can do that by seeing the person and not the illness, and offering him or her support by saying, ‘We will get through this together,’ or ‘I’m here for you.’”

The World Health Organization and the World Economic Forum report that mental illness represents the biggest economic burden of any health issue in the world. They project that by the year 2030, mental illness will result in $6 trillion in associated health care costs (two-thirds of which are attributed to disability and loss of work) worldwide.