Officials at SUNY Medical and Upstate University Police have investigated what was seen by some as a suspected incident of racial hate, as indicated by a stuffed doll with a noose around its neck. After an investigation Mantosh Dewan, President of SUNY Medical University issued a statement to the Upstate community about 4:00 pm Saturday afternoon:

To the Upstate community:

Upstate University Police has completed a thorough investigation of an unconscionable display of intimidation found in a work supply area on the Upstate Community Campus Thursday.

The investigation found no evidence of any threats to campus safety and the matter has been referred to Human Resources and the Office of Diversity and Inclusion for further action.

As an employer, hospital, university, we denounce such despicable displays and are taking all lawful measures to ensure our community members are not subjected to threats of any kind. 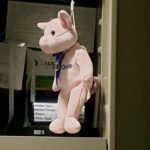 The incident was reported to officials initially and urbancny.com received a copy of the image yesterday and reached out to SUNY officials for comment. The image appears to have been placed at a work station in an area that was visible to those only in the general area.

This is just one of many incidents of suspected and/or confirmed displays of hate that has appeared at college campuses across the country. State, local officials and elected leaders have been united in their condemnation of the acts. In this case, “the matter has been referred to Human Resources and the Office of Diversity and Inclusion for further action.”