“Before Rob Astorino does any campaigning in Syracuse, he should have the integrity to apologize for saying people of immigrant decent ‘can’t keep a house’ while blaming them for the fact that Westchester has the highest taxes in the nation.”

(March 7, 2014 – UrbanCNY News) As Republican Gubernatorial Candidate Westchester County Executive Rob Astorino makes local appearances, Assembly member Sam Roberts and Common Council President Van Robinson issued a joint statement, “Before Rob Astorino does any campaigning in Syracuse, he should have the integrity to apologize for saying people of immigrant decent ‘can’t keep a house’ while blaming them for the fact that Westchester has the highest taxes in the nation. Syracuse and Central New York are proud of our immigrant communities and families, many of whom Mr. Astorino might be surprised to learn do in fact own their own homes. Maybe Rob Astorino can also learn from his visit to Syracuse how to provide housing to all New Yorkers – including black and Hispanic families. Rob Astorino’s Westchester County is now being investigated for enacting discriminatory and racist housing affordable housing policies that prevent people of color in Westchester from getting the housing they need.  It’s clear that Astorino’s racially divisive talk and record go against our values as a City and region. So maybe instead of crowing about his political ambitions, Rob Astorino can show some humility, apologize for his racist remarks and end the housing discrimination that is plaguing the county he runs.” 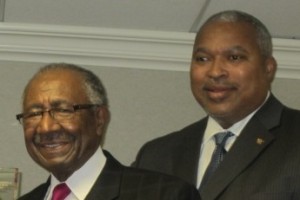 The Syracuse based leaders are speaking out after the developer of an affordable housing complex filed a federal housing discrimination complaint against Westchester County and the town of New Castle accusing them of kowtowing to local opposition and throwing up fake arguments to try to block the project.

The attempts to stop the Chappaqua Station project on Hunts Lane, which was approved by a previous Town Board, violate fair housing law because they have an unequal impact on blacks and Hispanics, said Randolph McLaughlin of Newman Ferrara, a the civil rights attorney representing the developer.

Under a 2009 fair housing settlement with the federal government the development’s 28 units would count toward the 750 units Westchester County agreed to build. These units would be marketed widely and the rents would be affordable.

Due to the housing settlement Town officials wooed Conifer Development to build on the land. But in November, a new majority opposed to the project won election to the Town Board, the complaint says. The opposition included the new supervisor, Robert Greenstein —the complaint accused them of seeking to block the development with the help of the building inspector by urging a state panel to reject fire code variances.

In his own words, Astorino’s Statements on “Illegal Immigrants”

The housing discrimination complaint may not be an isolated event there appears to be a pattern of statements and actions which may have culminated in the March 2014 decision by HUD to investigate charges of housing discrimination. On the news program, the County Executive Rob Astorino blames relocating Bronx residents and illegal immigrants for ever-increasing county taxes. Watch: Astorino who said, “Illegal immigrants can’t keep a house while blaming them for Westchester’s high tax record” Watch: http://tinyurl.com/Rob-Astorino