With snow falling as if a salt box were poured over the city, newly minter Department of Public Works Commissioner Jeremy Robinson, met with gathered media at DPW offices on Canal Street.  Robinson assembled area media to provide an update on the status of Syracuse snow removal efforts during Winter Storm, Liam. The Commissioner emphasized that the city is prepared and 22-24 trucks were already in service. The night before city DPW crews salted streets in preparation for the snow, which was forecast to be a hazardous snow event.  Schools and businesses across the region either closed or released employees early, as the snow continued to make driving a risky proposition. Onondaga was among many Counties in the area that issued Travelers Advisories, warning drivers of road and weather hazards, if they must drive. 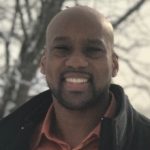 D.P.W. issued the standard warning to drivers who park on streets designated as odd/even, to simply follow those rules. “One of the biggest problems snow plows have is getting through a congested street.  We don’t like backing up a large snow plow” stated Commissioner Robinson, “we want people to be safe.” In addition he stated that DPW is clearing sidewalks the city is responsible for; especially areas under bridges, but Robinson also reminded people of their responsibility to clear sidewalks of snow.

Concerns were raised about side streets not being plowed, as the department emphasized their first priority is clearing major routes, hospitals, and hills. Noting that streets with snow removal access problems are listed on the city’s website, these have been identified as problem streets and the city is being proactive in asking those residents to observe parking rules. Regarding side streets, two words repeated throughout the gathering were, “be patient.”

Syracuse is a city that receives over 120 inches of snow annually, large snow events are no surprise to the crews at D.P.W.  The night before, vehicles were checked to make sure they were ready to plow the city’s 25 square miles, with 400 miles of roads. Commissioner Robinson  continues, “The city’s plows are equipped with GPS monitoring so we know where they’ve been, if you call and say that your street hasn’t been plowed, we have a way to checking.” The D.P.W. Commissioner then asked city residents to call 315-448-city or access the city of Syracuse website Report Snow Issues, where they can document their complaint, where it will be seen by D.P.W. officials.

There was reference to the “Snow Summit” taking place later this month, where people will gather to discuss how the city should approach its snow removal challenge. And a challenge it is, as municipal and private plows hustled throughout the day in an effort to keep up with the continuously falling snow.