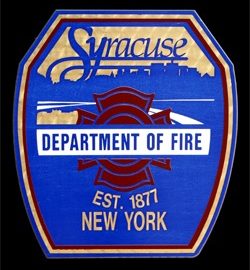 This Saturday, Feb. 3 marks the 79th anniversary of the Collins Block fire, the single deadliest fire in Syracuse Fire Department history.  On that date in 1939, members were called to the Collins building, 225 E. Genesee St., around 2 a.m. While working on the scene of the fire, around 4 a.m., the cellar roof collapsed and eight firefighters were killed when they were pinned underneath tons of bricks and debris.  On February 6, 1939, a ninth member suffered a heart attack; his death was attributed to the work he performed at the Collins Block fire.

Every year on the anniversary of Collins Block fire, the Department holds a memorial service to remember the 42 Syracuse Firefighters that have died in the line-of-duty protecting lives and property for our city.