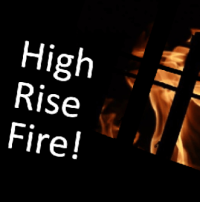 Syracuse, N.Y. – Shortly after 3:00am this morning, the Syracuse Fire Department responded to Toomey Abbot Towers (1207 Almond Street) for a high-rise fire. Multiple occupants of the building had called 911 reporting a smoke condition on several floors. The building’s fire alarm system had also activated.

Firefighters discovered an apartment heavily involved in fire on the 10th floor. After connecting to the building’s standpipe system, firefighters were able to extinguish the blaze in under 15 minutes. Crews were able to contain the fire to one apartment, which was significantly damaged. The occupant of that apartment was not home at the time of the fire.

All nearby apartments were searched for trapped or endangered occupants. Those in the immediate vicinity were evacuated by firefighters, while those in other parts of the building were instructed to shelter in place. It took over an hour to remove all of the smoke from the building. One resident was treated for smoke inhalation. No other injuries were reported. The cause of the fire remains under investigation.

Fires in high-rise buildings such as Toomey Abbot Towers are among the most challenging fires that we face. Toomey Abbot Towers is a 24-story building with over 300 apartments. Getting equipment and personnel to the fire floor while simultaneously evacuating endangered building occupants requires significant resources and careful coordination. Because smoke can travel throughout this type of building, firefighters must verify the safety of all building occupants during and after the incident.