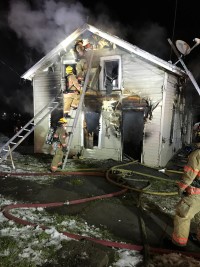 Syracuse, N.Y. – Syracuse Firefighters were on the scene of a house fire within 2 minutes.  At approximately 11:30 p.m. on March 24th 2020, fire crews were dispatched to 135 Nelson Street for a reported structure fire.  Engine 5 and Truck 3 (110 North Geddes Street) were the first to arrive.  They found a two story, wood framed, vacant structure, heavily involved in fire. 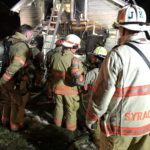 Never knowing that a vacant structure is truly unoccupied, crews mounted an aggressive interior attack to extinguish the fire and to search for potential victims.  Car 2 deemed the fire to be too far advanced to continue with interior operations and ordered an exterior attack.  By 12:20 a.m. the fire was under control and crews were conducting overhaul operations at the fire scene.  No victims were found.

Fire Investigators are searching for an origin and a cause for this fire.  National Grid, AMR and the Syracuse Police were also on the scene.  There were no injuries reported.