Syracuse, N.Y. – At 12:30 Tuesday afternoon May 4th, the Syracuse Fire Department was called to 309 Sand Street, between Marquette Street and Spencer Street, for a reported structure fire.  The first units were on scene in less than two minutes, and found thick black smoke issuing from the single story home.  Crews immediately forced entry and began searching for any trapped or endangered occupants while working to extinguish the fire. 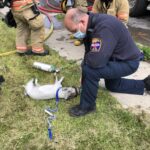 Within moments, firefighters from Truck 3 located a puppy that was unconscious and not breathing.  The puppy was quickly removed from the house, and firefighters were able to provide treatment with a special pet resuscitation device.  After several minutes, the dog began breathing on his own and regained consciousness.  Family members arrived at the scene and transported the dog to the veterinarian.

The occupants of the house were not home at the time of the fire.  It took crews less than twenty minutes to fully extinguish the blaze.  The Syracuse Police Department, AMR, and National Grid also responded to the incident.  The cause of the fire remains under investigation.