It was 1938 the city of Syracuse was a fast growing community moving headlong into the 20th century. Manufacturers were packed along-side residential units; newly discovered technologies facilitated a growing Carrier Corporation, Willis Carrier moved his facilities from New Jersey, Easy Washer, automobile manufacturers, and Syracuse China known globally for its fine dinnerware.  We were innovators in industry, Crouse-Hinds was born here, Salt potatoes originated in Syracuse by John Hinerwadel.  Candle companies and manufacturers of all kinds dotted the landscape. Syracuse was not alone experiencing a population explosion which was occurring across the country as cities continued to fill.

The nation was dealing with housing shortages and deplorable living conditions. It was not uncommon for residents in our city to share bathrooms, kitchens and other amenities that at the time escaped low income Americans. Housing was an issue that needed to be addressed the nation began investing in public housing as New York State was the nations incubator for ideas, cities like Syracuse, NY were at the epicenter of trying concepts attempting to address issues none more pressing than affordable, safe housing.

Until the early 1950’s Public Housing’s goals was to provide temporary housing until the family found private sector housing. Over time it was clear that some families would not be able to afford the rents in the private sector. In 1970 regulations changed recognizing a mix of income making families with various income levels eligible for public housing, prior to the change displaced families could not qualify for Public Housing.

Regulations recognized percentages of income as criteria capping a residents income spent on housing at 25%. In 1973 HUD instituted the Section 8 program that provided supplemental rental payments to participating landlords.

While horror stories of “Housing Projects” across the nation flashed across our screens Syracuse Housing Authority has consistently been recognized nationally for involvement of tenants and programs targeting their youth.

Over 75 years SHA has morphed as the nation’s funding sources have shifted. For example; there are no funds for traditional “projects” therefore SHA has become an active participant launching their own entity designed to provide residents the long-term opportunity to own a home. Tax-Credits have allowed SHA to become a developer of single family homes, renovating apartment buildings to accommodate the diverse population in need of safe affordable housing.

Syracuse Housing Authority embarked on a new initiative that has provided in-fill housing using Tax Credits as a developmental tool.  Clusters of new homes have risen in the shadow of the Midland Ave. Regional Treatment Facility and along Oakwood Ave. near Dr. Martin Luther King, Jr. School. There’s another location on Lincoln Ave. behind Southwest Community Center part of a 50 home building project developed by Syracuse Housing Authority. Syracuse Neighborhood Innovations Inc. was formed as an entity to be the Not-for-Profit organization that operates the program.  This first project of 50 houses is being marketed and managed by Homes of Syracuse. 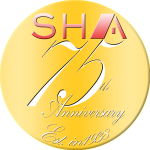 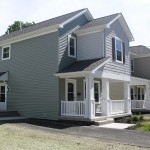 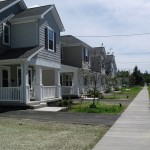 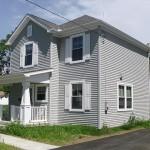 Side view of Oakwood Ave. Construction 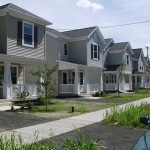 These lots were once empty 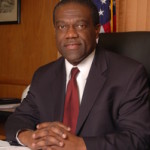 Tax Credit program houses means for 15 years homes must be available as affordable housing.  The investor receives annual Tax Credits for their investment, this provision lasts 15 years then these properties are available for sale. The current renter will be given the opportunity to purchase the home, who ever is living there they’ll have first right of refusal. If after 15 years they want to stay as a renter then they can stay.

The results have been transformative as seen on Oakwood Ave., Lincoln Ave. and other locations where SHA’s construction provides in-fill homes to the many vacant lots that dot the Syracuse urban landscape. Apartments are also being renovated in various neighborhoods by SHA creating affordable housing opportunities for individuals that don’t require a three bedroom home.

Scattered site projects include the newly renovated Leonard Apartments at the corner of West Onondaga Street and West Streets.

The Syracuse community has become engaged in ongoing discussions about Interstate 81’s future as the elevated portions must be replaced. This has led to community based organizations like The Syracuse Chapter of the National Action Network formally going on record opposing the boulevard concept at a meeting January 16th. At the same time, N.A.N. endorsed the goals and views of the Save81.org organization, and applauded Save81.org’s efforts. N.A.N. members are concerned that downgrading I-81 down to a street-level boulevard would increase traffic congestion and air pollution, endanger pedestrians and hurt the economy, especially in City neighborhoods where many N.A.N. members live.  “We need to make sure our concerns are not left out of such an important discussion,” said Dixie.

SHA is looking at the fact that whatever happens to the highway there will be some displacement. Even if portions are taken down and rebuilt the construction activity will displace SHA’s Administration building and as many as 1,000 SHA residents.  “Whether the elevated portions are taken down replaced by a boulevard or we pursue a tear-down rebuild, SHA will be impacted. SHA’s working with developers, planners, local officials and members of the board, we are at the table as these discussions are being held”, Simmons proclaims.

The Board of Directors of Syracuse Housing Authority has not taken an official position on whether Interstate 81 is taken down or not, according to Simmons, “whatever happens here it has to have a positive economic impact on the neighborhood and if people are relocated they’re relocated to quality affordable housing, there are no immediate plans for Syracuse University or Upstate to take over Syracuse Housing Authority properties at all.”

There are discussions about mixed use integrating Syracuse Housing Authority properties with new development bringing in mixed residential and commercial. Simmons talks about planning for the next 75 years.

Instead of looking at the negative connotations of impending change Syracuse Housing Authority prepares to celebrate 75 years of service and Director Bill Simmons is clear that whatever occurs, leveraging location, improving employment opportunities and focusing on quality of life for SHA’s residents is his number 1 priority.