The Mayor issued a proclamation declaring Saturday to be “Juneteenth Festival Day” in the city of Syracuse. The ceremony will take place on Friday, June 16, 2017 at 10 a.m. at Syracuse city hall, 233 East Washington Street.

“Juneteenth is a reminder of the struggle and success of the African American community in Syracuse and across the United States. This is a day where everyone can come together and celebrate the continued march towards progress for many,” said Syracuse Mayor Stephanie A. Miner. “I am pleased to welcome this annual celebration to city hall and extend my best wishes for this year’s Juneteenth festival.” 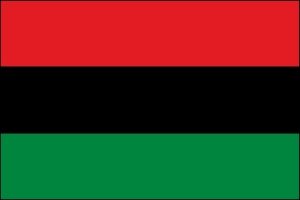 Juneteenth marks the anniversary of when Major General Gordon Granger marched troops into Galveston, Texas on June 19, 1865 – more than two years after the Emancipation Proclamation – and announced to the slave population that the Civil War had ended and their freedom had been won.

This year, Juneteenth locally will be marked with a parade on Saturday from the Dunbar Center to Clinton Square, where all day a festival will be celebrated with food and music. 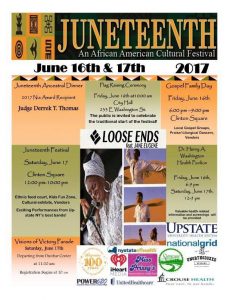 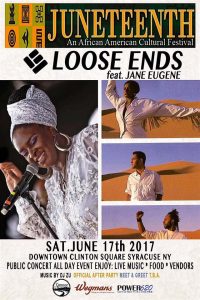 The full text of Mayor Miner’s proclamation appears below:

Whereas,   The Annual Juneteenth Festival in the City of Syracuse is a community celebration of the spirit of self-empowerment, a commemoration of the long, and arduous fight for freedom by African-Americans in the United States and the acknowledgement of the many contributions African-Americans have made to our mutual American culture; and

Whereas,   Juneteenth remembers the celebration of freedom on June 19, 1865, nearly two and a half years after the Emancipation Proclamation was issued, when Major General Gordon Granger and his Union soldiers arrived in Galveston, Texas with news that slavery had ended and the war was over; and

Whereas,  Syracuse is proud to be home of one of the largest Juneteenth festivals in the country, attracting more than 28,000 attendees in 2010; and

Whereas,   The 2017 Juneteenth celebrations will include a recognition dinner, flag-raising at City Hall, a parade, and a variety of other activities; and

Whereas,  We acknowledge and thank the Juneteenth Festival Committee, sponsors, supporters and participants for their commitment to this important annual community celebration.

NOW, THEREFORE, I, STEPHANIE A. MINER, Mayor of the City of Syracuse, do hereby proclaim the SEVENTEENTH DAY OF JUNE, TWO THOUSAND SEVENTEEN as

Juneteenth Festival Day
In the City of Syracuse

IN WITNESS WHEREOF, I have hereunto set my hand and caused the Seal of the City of Syracuse to be imprinted the SIXTEENTH DAY OF JUNE, TWO THOUSAND SEVENTEEN.