As major party candidates begin petition drives today, Walsh reminds supporters to “save their signatures” for when his independent campaign can begin carrying petitions on April 13

Syracuse, N.Y. – Syracuse Mayor Ben Walsh officially launched his campaign for a second term with the announcement of a key endorsement from the Independence Party of New York.  Walsh, who was elected in 2017 as the first independent mayor of Syracuse in more than 100 years, also introduced his new campaign theme, “Keep Rising,” building on the “Rise Above” message that powered support from a broad and diverse coalition during his first campaign. 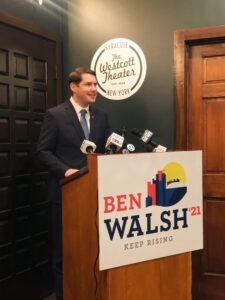 “Our progress during the past three years is remarkable, but it has only just begun,” Walsh said at a press conference at the Westcott Theater in the City’s Westcott neighborhood. “We have a lot more work to do to make sure every resident feels the progress and has the opportunity to prosper, but on virtually every measure, Syracuse is getting stronger and better. The City is on more solid financial footing; we are drawing investment from some of the world’s biggest companies; and we are improving city services.”

Due to the COVID-19 pandemic, the State has already reduced the number of petitions required by major party candidates. A similar bill reducing the independent signature requirement, which covers the Walsh campaign, is awaiting signature by Governor Cuomo. 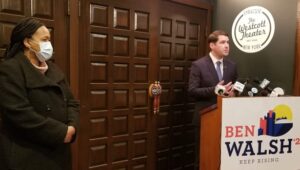 In its endorsement, the Independence Party said the Mayor’s “pragmatic style of leadership is what cities in New York need and your non-partisan approach has advanced progress for the City of Syracuse.” The party said Walsh’s “ability to operate outside the political extremes has led to better cooperation between all levels of government, which has been especially important during the COVID-19 pandemic.”

The party also praised Walsh’s use of data in managing the City and his creation of the Office of Accountability Performance and Innovation which “exemplifies the way in which government must inform its action and measure its performance based on data.”

Mayor Walsh’s campaign launch announcement also included the introduction of its new logo and campaign theme, “Keep Rising.” The logo features an updated silhouette of the Syracuse skyline and the image of a sun rising over the City. Walsh said the Keep Rising message references the opportunity to continue the progress being experienced in the City and the importance of continuing to rise above partisanship.

More information on the Walsh campaign, including ways to volunteer or donate, is at benwalshformayor.com.